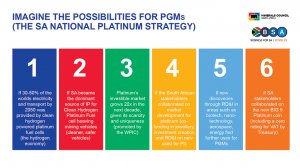 JOHANNESBURG (miningweekly.com) – Instead of being the $11-billion-a-year type industry that it is today, the platinum business has the potential to be a $35-billion-a-year industry by 2050, Minerals Council South Africa CEO Roger Baxter said on Wednesday.

Baxter made this statement in response to a question put to him during a virtual Platinum Group Metals (PGMs) Industry Day event attended by 230 people and covered by Mining Weekly. (Also watch attached Creamer Media video.)

At the event, Baxter was asked what the Minerals Council would request of the South African government.

“If you had one wish, what would you ask the government to do for the PGM industry?” asked mining luminary Bernard Swanepoel, who moderated the online event.

“I would ask them to buy into our draft national platinum strategy and to work with us jointly to develop the global platinum market, including some investing in it, including co-hosting together,” was Baxter’s response.

“If government helped invest in growing global platinum demand, together, it’s going to create economic development for this country 100 years into the future. I actually think it’s probably one of the most sensible investments. Putting a couple of hundred million rand into co-funding the effort of business in growing demand and investment at upper levels, and the hydrogen economy, I think would be brilliant,” Baxter added.

“We’ve basically said that instead of being an $11-billion-a-year type industry that we are at the moment, we are saying that by 2050, we could have platinum as a $35-billion-a-year industry, if we can grow the demand for platinum.

“It’s a demand story. Growth can only happen if there’s demand for the product. But we’ve got 87% of the world’s known platinum reserves. We could mine it for huge benefit for the economy in the future if we continue to develop and grow the markets into the future. That’s key.

“Through the platinum leadership forum we are trying to drive the agenda and we’ve had some good engagements with Minister Gwede Mantashe, I must say.

“Each of our leadership forums have had a discussion with him. We’ve taken him through the draft national platinum strategy and there are further engagements taking place on these specific types of strategies,” Baxter said.

Swanepoel had put it to him earlier that he was speaking about platinum as if suddenly it had great uses.

On the comparison with gold, Baxter responded: “Two quick issues, the first from the scarcity value point of view. If you take all the gold that’s ever been mined in the history of humankind, which is about 180 000 t, you could fill up roughly three and a half to four Olympic-size swimming pools from a volume perspective.

“If you take all the platinum that’s ever been mined in the history of humankind, you could basically fill up an Olympic-size swimming pool ankle deep. Look at the uses of platinum and what’s happening at the moment in terms of platinum’s investment demand angle; the significant progress that’s been made on the platinum jewellery side in countries like India and for the future in countries like China - that’s something that Platinum Guild International is working on; and what’s being done on the industrial application side, the emerging areas around nanotechnology and other industrial uses; then, in terms of clean air and the hydrogen economy and how it’s starting to really change the world - there’s a hydrogen road map being developed for South Africa.

“Let’s face the reality, the Minerals Council is one of those organisations that’s helped to start championing the process by installing a baseload fuel cell, a 100 kW platinum fuel cell. If anyone wants to come and pay a visit to come and see how this technology works, we're currently achieving 70% energy efficiency. We basically get 50% electricity out of the process and we get 20% exhaust heat that we can use for heating and cooling,” Baxter told the 230-attendee virtual conference.