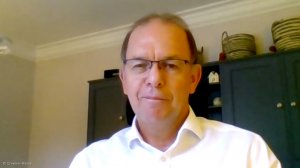 Speaking to Mining Weekly from London in a Zoom interview, Raymond said: “As you know, the WPIC doesn’t forecast price but one of our important roles is to make sure that people are aware of platinum as an investment asset and secondly, that they’re able to take a view on price, and that view is probably governed by three dominant features at the moment. (Also watch attached Creamer Media video.)

“In terms of the impact of the global pandemic, we’ve had an increasing global risk and, as a result, precious metals are in demand. People want a hard asset, people want something that is uncorrelated to equities, and gold is extremely popular.

“Platinum fills that role. It’s a precious metal. The price of platinum is highly correlated to the price of gold, so people that are using gold as an alternative asset are also able to use platinum because of the high correlation.

“Secondly, because platinum does some fantastic things in industrial applications, platinum has an additional benefit that it can do some good things, particularly post the global pandemic.

“In terms of price sustainability, platinum group metals, that includes predominantly palladium and rhodium also used in autocatalysis, and what’s going on in those markets is certainly impacting PGMs. I think all three of those PGMs are in deficit over the next few years, making it very interesting for the people that produce them as well for those that invest in them. I think sustainability looks strong,” Raymond said.

INVESTMENT IN PLATINUM AS A PHYSICAL METAL

ETF investors invest in a traded instrument on an exchange that is backed by physical platinum metal. In 2019, an additional million ounces went into platinum ETFs, with typical investors being large institutions, many of them South African institutions, that are long on platinum and typically use ETFs.

Quite fascinating this year is the first quarter buying of more than 300 000 oz of bars and coins, much of them in the traditional market of Japan, but also very interestingly in the US , where there was strong demand.

There was strong demand, but Covid’s major impact in Northern Italy resulted in Switzerland refineries close to Northern Italy being temporally closed, and platinum bars and coins not finding their way into the US, where they were pretty much sold out.

But that has since recovered and the WPIC is forecasting that the unprecedented 300 000 oz first-half achievement will be doubled across all four quarters.

"Some institutional investors tend to look at ETFs more as a stock than a demand. That’s a long debate but that’s their choice. However, 300 000 oz of bars and coins was a lot harder to ignore and we’re forecasting that in 2020, there’ll be 600 000 oz of platinum bars and coins purchased and that’s what has got investors looking at it a little more carefully,” said Raymond.

“Bar and coin demand tends to be very sticky. The kind of people that are buying gold are worried about what the pandemic will do to the world. I think we’re in for a pretty rocky next two or three years, and people are saying they’d like a hard asset. We’ve seen the gold price run up and platinum has certainly been in demand in that respect as well,” Raymond added.

On September 8, when WPIC reports second-quarter supply and demand the trend in investment demand will be clearer, but already ETF flow is particularly strong, after sales of more than 300 000 oz during March, holdings have already recovered that. More investors are taking note of platinum, which for 45 years sat at a premium to gold, but which is currently trading at half the price of gold.

The big PGMs driver of the last few years has been palladium, as a consequence of China becoming the emissions control leader.  Traditionally, emission limits in the rest of the world were far more stringent than in China. The US and Europe led and China lagged, which meant that by the time catalyst fabricators came to introduce them into China, they had already become quite efficient, rendering typical loadings in China considerably lower than in the West. When Europe went from Euro 3 to Euro 4, China was probably on Euro ‘2.5’ by equivalent.

“But the interesting thing about China 6 and VI – and that’s China numeric six for passenger vehicles and China Roman numeral VI ‘six’ for heavy duty – is that it’s more stringent than Real Driving Emissions in Europe, and it’s more stringent on particulates than emissions control in the US, and that’s quite material. What happened in 2019 when China started implementing, is that the loadings on vehicles went up by 40%. There was nearly an additional 500 000 oz/y of palladium demand that went into China to implement that more stringent emissions rule,” said Raymond.

The upshot was a long string of deficits in the palladium markets and the palladium price doubling from $700/oz to $1 400/oz and then doubling again from $1 400/oz to $2 800/oz. Its current price around $2 000/oz is a reflection of Chinese automakers buying on spot markets to make their largely gasoline car fleet and as a result they need that palladium particularly and their much higher loadings of rhodium.

“So, you’ve seen palladium and rhodium prices go up significantly purely on the back of China 6. Those prices have benefitted the South African producers significantly. But the real issue is that the substitution between platinum and palladium, now at a one-to-one ratio has happened before.

“It happened in 2000. Significant amounts of platinum went back into gasoline cars. We saw in the mid-2000s when rhodium was at $10 000/oz, palladium substituted it. So, the ability of the automakers and the fabricators to change the ratio of these metals and catalysts is a long-standing expertise of surface chemistry.

“Substitution is quite important to platinum because even if there is only a small amount of substitution, even just 5% of gasoline vehicles in China and the US, that’s 450 000 oz of platinum. For platinum, that’s a big deal. For palladium, it doesn’t do much to solve the deficit.

“In May, we forecast a surplus this year of about 450 000 oz of platinum. A little bit of substitution suddenly makes that zero. A little bit of investor interest, and suddenly you’re looking at deficits for the next little while in platinum. The interplay between those metals is really quite important. Then for platinum, the big dominant theme industrially is the fact that diesel has become much more important during the pandemic,” Raymond told Mining Weekly.