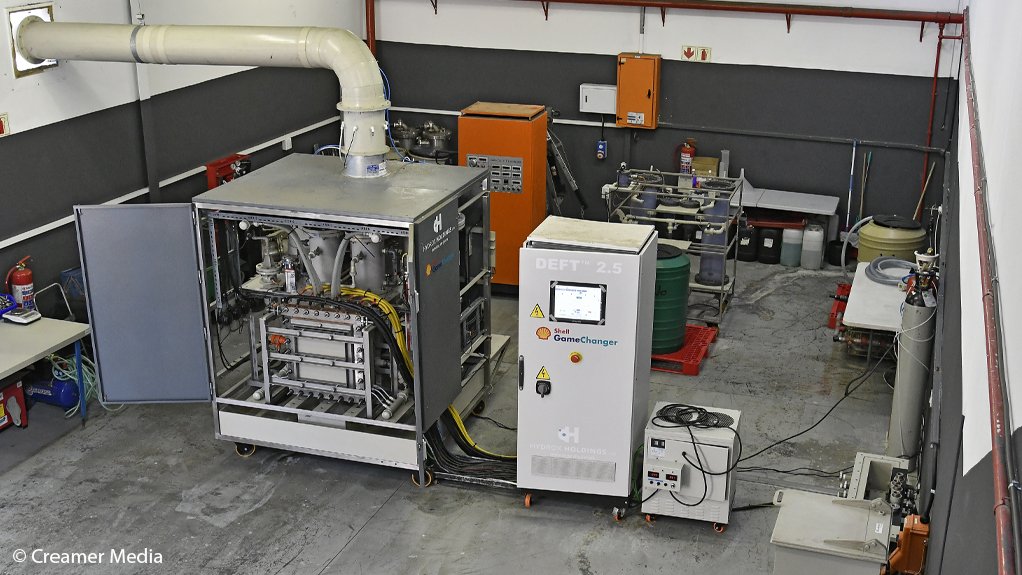 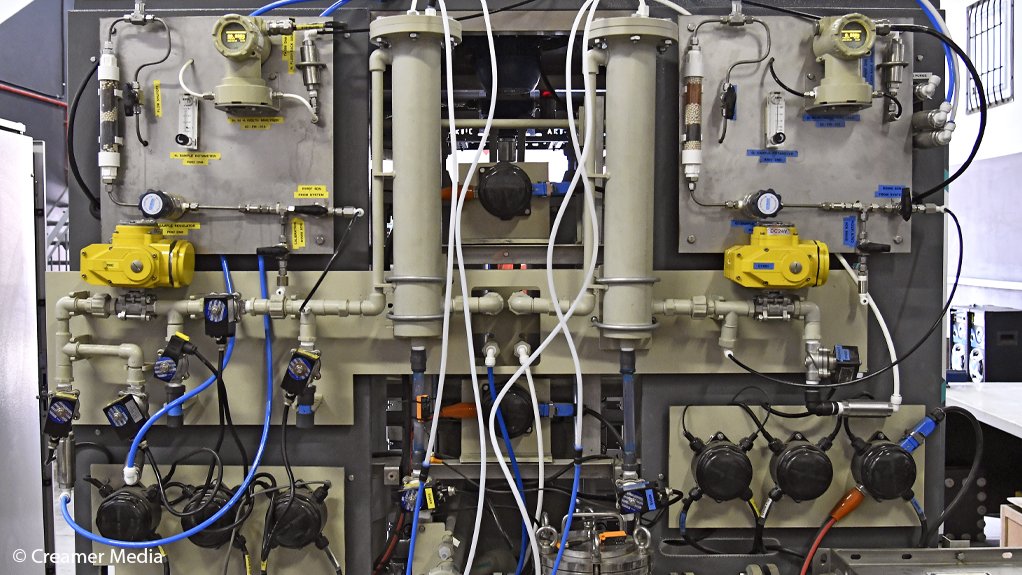 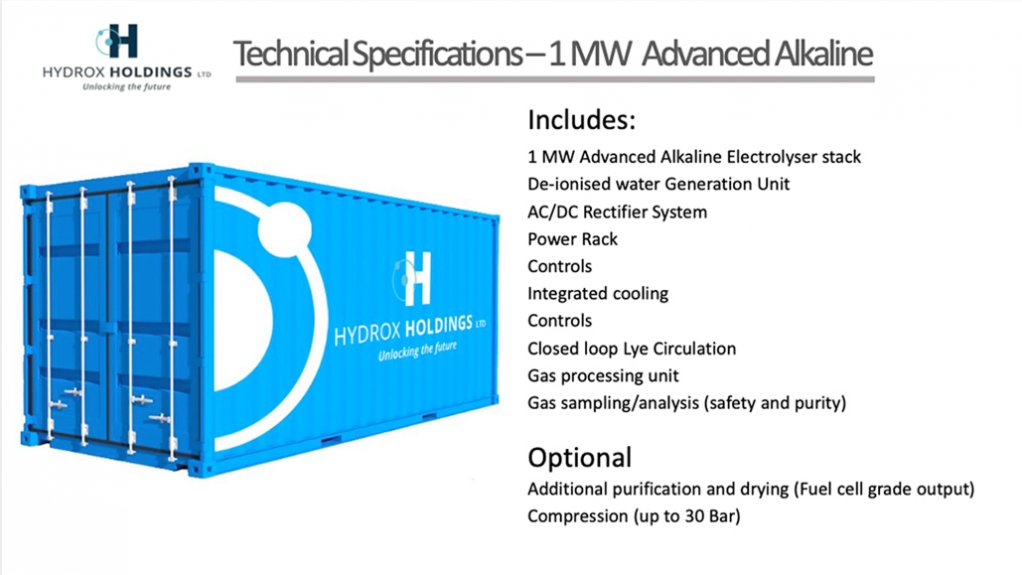 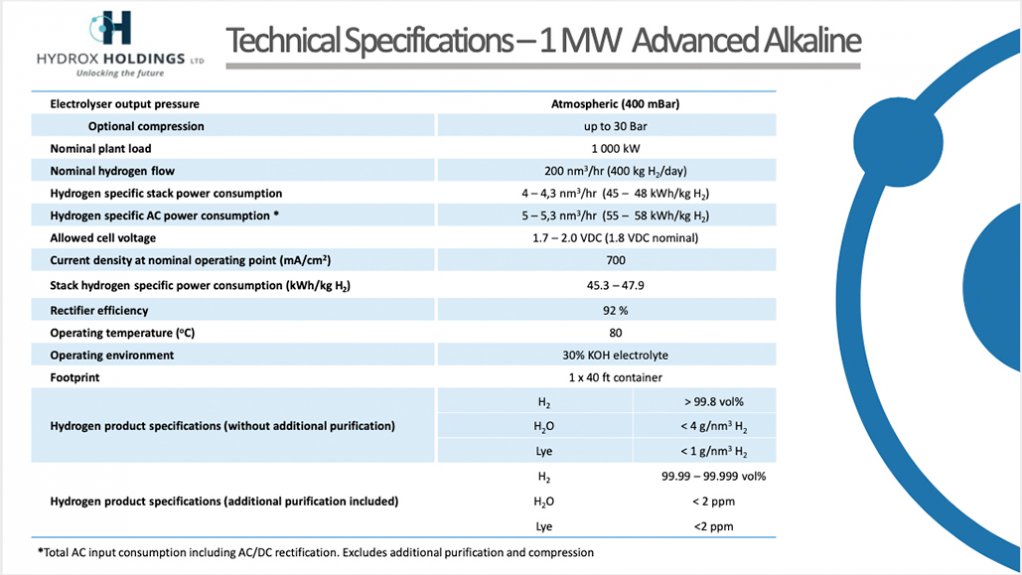 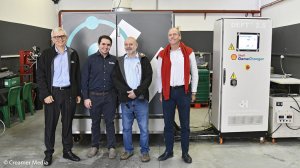 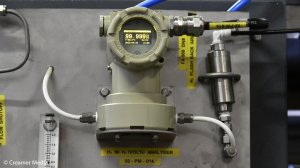 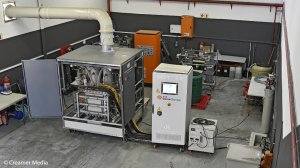 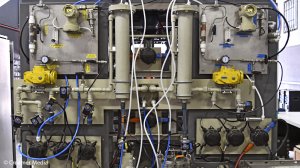 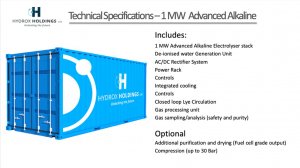 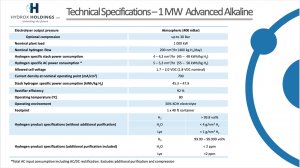 JOHANNESBURG (miningweeky.com) – The proof-of-concept of the platinum-boosted advanced alkaline electrolyser – the AAE ­– has been successfully completed by Hydrox Holdings of Randburg in a pioneering achievement that offers the potential for South Africa to enter the fray as world demand for hydrogen electrolysers goes through the roof.

Attracting a favourable response is Hydrox’s offtake concept, which involves customers paying only for the hydrogen, a potential game-changer in the unlocking the hydrogen economy.

Hydrox is confident that it will outperform existing alkaline electrolysers and take green hydrogen down the cost curve as Africa's first electrolyser original equipment manufacturer.

“The vast experience we gained through the development of various innovative electrolysis systems has been of major benefit,” said De Jager.

Hydrox engineers designed the AAE system from the ground up, using state-of-the-art components.

More than 70% of the electrolyser is locally manufactured/sourced, a local content that will undoubtedly increase once a South African hydrogen supply chain is in place.

De Jager hailed the commitment of mining company Anglo American to reach carbon neutrality through the replacement of its mining fleet with hydrogen fuel cell trucks, an area in which Hydrox sees itself playing a major role as a preferred supplier of electrolysis systems, at a time when electrolysers are being imported as fully manufactured units.

While established global electrolyser manufacturers are focused on the large 3 MW-plus systems, Hydrox's focus is on fully containerised 1 MW systems, which simplify installation and deployment, especially in remote areas.

With the single biggest factor influencing the price of hydrogen remaining the cost of electricity, access to renewable energy will have major price and greenness benefits for the AAE unit.

At an electricity price of R0.50 kWh, Hydrox is confident that its electrolyser will generate hydrogen at a cost of $3/kg, giving clients with curtailed or excess renewable energy the ability to store such energy as hydrogen.

The next step for Hydrox is AAE’s scale-up to larger sizes, which implies increasing its own capacities and employing specialised engineering firms to complete full system engineering processes. This will be followed by the commissioning of 100 kg/day, 200 kg/day and 400 kg/day units.

“We foresee huge expansion and job creation possibilities,” said De Jager, with the prospect of Hydrox technology being licensed to facilitate roll-out in other countries.

Moreover, the operational and maintenance requirements of AAE electrolysers will create further opportunities.

However, further development of the award-winning Shell-funded DEFTTM hydrogen technology was temporarily halted, owing to a lack of financial resources as well as the urgent need to focus on the completion of the AAE.

But with global interest in DEFTTM resurging once more, Hydrox is in talks with various parties to fast-track its development once more.

Hydrox is confident that it will be able to slash 25% off the produced cost of hydrogen by moving to higher temperature operation of 200 °C and 250 °C, allowing for better usage of power and heat inputs, and thus targeting higher production efficiencies.

Current electrolysis systems can waste up to 40% of the electrical input through heat production and removal.

As a privately funded company Hydrox is now actively pursuing various options to acquire the required capital to complete and commercialise its AAE units.

The company is keen to partner with local companies as the development of a local electrolyser industry has tremendous advantages.

One attractive option is a listing on the Alternative Investment Market, a sub-market for the London Stock Exchange, which will not only unlock the needed funding but which will also serve as a platform to enable its shareholders to trade their shares.