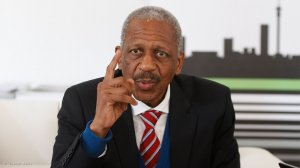 Delivering the keynote address at the Junior Indaba, the former premier of Mpumalanga was speaking a day after Mineral Resources Minister Mosebenzi Zwane announced that the upcoming third iteration of the Mining Charter would be gazetted next week and would contain the “designation of minerals” in support of government’s policy of mineral beneficiation.

“We need to negotiate charters that satisfy stakeholders and not continue to change the rules of the game in the middle of the game,” Phosa instructed. (Also watch attached Creamer Media video).

The strategic uncertainty and the non-consultative nature of the current policy process did not, he said, help investment in the mining sector and created hesitancy.

The wild and populist utterances of some leaders regarding the empowerment process did not help growth and stability in what he described as “our sector, because I’m also involved in mining”.

He pilloried the Department of Mineral Resources for taking excessive time to process mining right applications and demanded urgent action on illegal mining.

“To get a mining right is a painful time. It’s a red tape time, and getting water rights is a big headache,” he said.

Legal miners were all struggling for rights and were forced to pay royalties and taxes, yet large numbers of illegal miners, particularly on the eastern limb of the Bushveld Complex, were not bothering about rights, and had no royalties or taxes to pay.

Phosa had approached the Minister directly on this matter and had been given an undertaking by the Minister that action would be taken against illegal mining.

“So, let’s see what happens,” he told the Junior Indaba conference attended by Mining Weekly Online.

He described South Africa as a country in dire need of drastic political and economic change and praised the judiciary for being the only centre of constitutional power that is functioning.

At the very least, South Africa needed new political leadership, urgent changes to the education system, and consensus between all stakeholders on how to revive the “rainbow spirit in our nation”.

What was taking place under current political leadership was “radical economic looting”, and Phosa criticised the ANC’s party discipline for having crossed the border between right and wrong and said the organisation had lost its moral compass.

After apartheid, the Zuma/Gupta scandal was the worst crime against the people of South Africa.

To attract the foreign investment, the country needed to treat education as a national key strategic project and ask leaders from the private sector to join government to fund and execute educational programmes of the highest excellence.

The country needed to revisit programmes that focused on practical reconciliation between all the citizens of South Africa and to redefine the economic strategy to incentivise the private sector and foreign investors to create jobs in the short term.

“Stop tinkering with sector charters as if it is academic exercise. Negotiate charters that will satisfy stakeholders but also create room for sizable growth,” Phosa said.