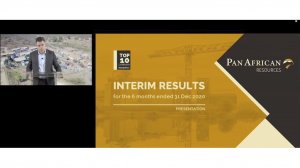 The miner also managed to reduce its debt by 47.3%, implying a net debt to net adjusted earnings before interest, taxes, depreciation and amortisation (Ebitda) ratio of 0.5.

During December, the miner paid out a record aggregate dividend for the June 2020 financial year of $17.8-million, which is up from the $2.9-million paid in 2019.

As such, the miner is on track to achieve its full-year production guidance of about 190 000 oz, which was boosted by the production of 52 354 oz from the company’s Barberton Mines complex.

With more improvements expected from Evander’s 8 Shaft Pillar project in [the second half of the financial year] and starting from a higher gold price, we expect [the second half] to demonstrate an improvement [compared with the first half of the year], all other things being equal, with only the extraordinary strength of the rand since last April likely to prove a slight brake on the company’s performance."

Pan African Resources is also progressing with the acquisition of Mintails' operations, with an agreement for evaluation of the assets having been extended to January 31, 2022.

To date, Loots says Pan African has made good progress, with a fatal flaw analysis having found no fatal flaws. He adds that a financial evaluation is under way to determine the profitability of undertaking the project.

“We are thinking about Mintails as a rehabilitation project that can generate attractive returns and this is the manner in which we will approach it from a funding perspective on a ring-fenced basis.”

The extension came with the properties’ liquidators needing extra time to meet regulatory obligations. This enables Pan African extra time to evaluate the opportunity and come up with a proper feasibility, says Loots.

He adds that the initial timeframe was not sufficient because of the degree of work needing to be done on all of the aspects including water and tailings deposition.

“We are much more comfortable that the extension is sufficient [time to better evaluate].”

In terms of progress being made at Pan African’s Egoli gold mine, the company expects a “much-improved” performance during the second half of the 2021 financial year, as the pillar mining gains momentum, following slow 8 Shaft pillar production.

“We are excited about the Egoli project, which will be South Africa’s newest underground gold mine and which will contribute considerably to the group’s future gold production,” says Loots.

As such, Pan African has started with early preparation work and limited capital expenditure in anticipation of the commencement of the execution phase of this organic growth project.

The existing shaft infrastructure and Kinross metallurgical plant, which will be used for Egoli’s production, is set to contribute significantly to reduced capital cost and production timelines, making the project attractive from a financial perspective, he states.

Meanwhile, construction of the 9.97 MW solar photovoltaic plant at Evander Mines is on track to commence during the first quarter of the 2021 calendar year, with first power expected to be generated during the third quarter of 2021.

He says this plant will be “one of the first of its kind in the South African mining sector” and demonstrates the company’s commitment to environmental, social and corporate governance (ESG) initiatives, with the benefit of cost saving and certainty of power supply.

A feasibility study for a similar-sized solar photovoltaic plant at Barberton Mines is also currently being undertaken.

“In conjunction with several other advanced ESG projects, these plants will also underpin the group’s profitability and sustainability in the longer term.”