On the road to reconciliation, tension between miners and Aboriginals grow 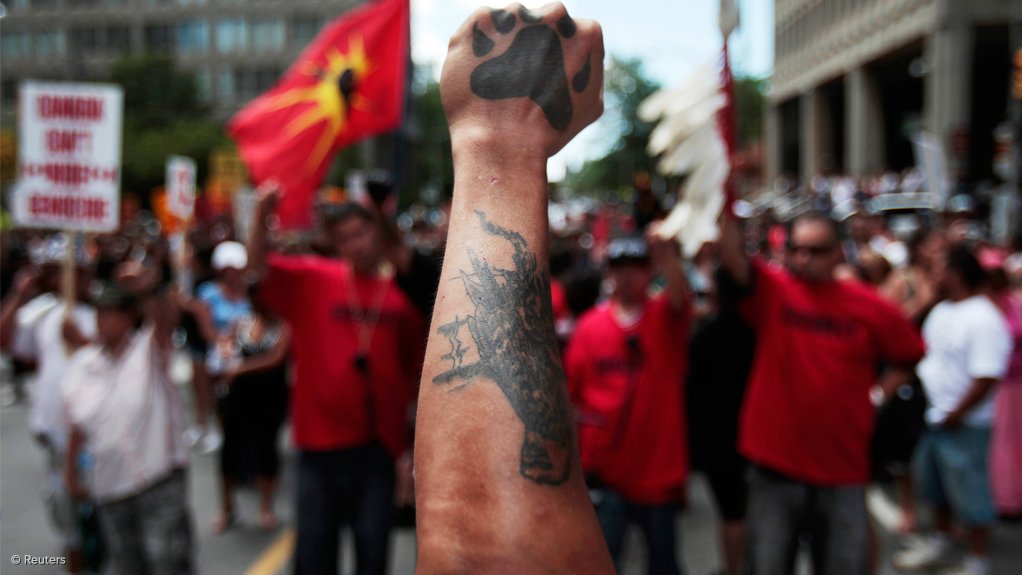 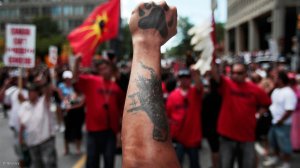 Photo by Reuters
A protester raises his fist during a demonstration for indigenous sovereignty in Toronto.

TORONTO (miningweekly.com) – While Canada has come a long way in reconciling pre-existing Aboriginal sovereignty with assumed Crown sovereignty, tension is rising between the proponents of several new mining projects located on Crown lands, or within Aboriginal reserves, and Aboriginals, who increasingly assert their rights.

In recent weeks, several Aboriginal communities have voiced their concerns regarding proposed mining projects, insisting on their right to self-determination.

For example, this week the West Moberly First Nations were in the Supreme Court of British Columbia, in Nanaimo, where they argued their case against a proposed coal project in an area 34 km north of Chetwynd, in north-east British Columbia, which had been deemed of “critical spiritual and cultural importance” by the community.

Last summer, the Energy and Mines Ministry issued mining permits to Canadian Kailuan Dehua Mines - a Chinese-backed mining company - for its Gething project, authorising the company to remove 100 000 t of material, transport 15 000 t of coal and construct the main components of a mine that would operate for about 30 years.

The First Nation said that the project is located about 30 km from the band's reserve, and about 50 m from a ‘culture camp’, where members go to hunt, fish, and teach ancient traditions to children and youth.

“The Crown doesn't seem to understand how important this location is to us, and they didn't give us the chance to tell them. The government allowed the company to prepare the studies it needed, but wouldn’t wait for the detailed report we produced on the impacts to our culture,” West Moberly Chief Roland Willson said, adding that the government did not honour its constitutional duty to consult.

In another example, the Tahltan Nation in Northern British Columbia last week announced that it had “banned” anthracite project developer Fortune Minerals from entering its communities without first asking for permission from leaders.

The Iskut and Tahltan bands said that they had both passed Band Council Resolution agreements to hinder Fortune from disseminating information regarding its proposed Arctos openpit coal mine, on Mount Klappan, which lies in traditional Tahltan territory.

“Tahltan people have asked their leadership to oppose Fortune's Arctos anthracite project proposal. Our people spent last year protecting the land while Fortune tried to drill in the area, and yet still they try to promote Arctos within our communities.

“If they [Band Council Resolutions] are not respected, bylaws which make it illegal for Fortune to enter the reserves will be considered,” she said in a sternly worded statement.

According to the First Nations, the Fortune project would be located in a critically important area of Mount Klappan that requires long-term management and protection to preserve cultural and ecological values. The area, also known as the ‘Sacred Headwaters’, is a traditional hunting ground and feeds three of the region's major salmon-bearing rivers – the Skeena, Stikine and Nass.

While the Bands voiced clear opposition to the project, McPhee noted: “For years the Tahltan Central Council has made it clear to the province of British Columbia and companies, that it is ready to partner on sustainable development in Tahltan territory.”

“We have a proven track record of collaborative success – including the Northwest Transmission Line and AltaGas projects within Tahltan territory. At the same time, we have been clear in carrying forward the message of the Tahltan people that further expansion of mining in our territory requires the protection of the Sacred Headwaters, and that if the area is not protected it could have consequences for other projects and opportunities across Tahltan territory,” McPhee cautioned.

Fortune’s investor relations manager Troy Nazarewicz pointed out that Aboriginal rights, and in particular the questions of the extent and jurisdiction of Aboriginal self-government, and whether Aboriginal people can veto development decisions in their traditional territories, is a critical public policy issue in Canada, as well as in other parts of the world.

“While the Tahltan Nation has stated that the Klappan region is an area of significant cultural, traditional, spiritual and environmental value to their people and they do not want it developed for those reasons, the provincial government, which has broad responsibility for the management of these Crown lands, as well as the social and economic interests of all British Columbians, has issued tenures and is carrying out its legislative and public policy obligations for the social, economic and environmental assessment of this project, which is located on Crown lands,” he told Mining Weekly Online.

Nazarewicz added that as a result of Aboriginal political development and emerging case law, the pressures for much greater Aboriginal government involvement in decision-making had grown. “The Arctos project, is in part caught in this issue,” he said.

“While the leadership of the Tahltan continue to express total opposition to this project, the company has received input from numerous citizens who are at least interested in learning if the project can be developed in an environmentally safe and sustainable manner, and what potential benefits could ensue to the Tahltan people.

“Fortune Minerals is committed to an open and transparent dialogue about this,” he said.

This work includes information sharing on the details of the project, including design and all supporting environmental and technical studies, receiving Tahtlan perspectives on the potential adverse impacts of the proposed project on their Aboriginal rights and identifying the options for mitigating adverse impacts.

The proponent of yet another contested British Columbia-based project, Chieftain Metals with its Tulsequah Chief project, told Mining Weekly Online that projects sometimes come under fire from Aboriginal communities, aided by nongovernmental organisations (NGOs) that have no vested interest in the project or community.

Chieftain president and CEO Victor Wyprysky said that there was a “huge and negative national impact and travesty of allowing NGOs, often foreign, to mount spurious groundless challenges without rules or accountability, and [engage in] endless, undefined consultation requirements, which are often used as revenue sources, without virtually any focused objectives, to hamper legitimate and valuable projects, thereby seriously harming national interests and progress”.

He noted that should the transcontinental railroads, roads, earlier pipelines or virtually all industrial projects have been held to these standards a century ago, it is questionable whether Canada’s economy would have developed to where it is today.

“Vague concepts such as ‘protecting a historic way of life’ and ‘sovereign interests’ to name some of the arguments used to attack projects, need to be rigorously defined and then honoured by federal and provincial governments, rather than forcing the risk to default to companies and investors.

“Canada has an opportunity to show the world a fair, enlightened and progressive example of resource development and settle historic Aboriginal issues while supporting legitimate projects.

“Resource developers today look to create value and are also focused on environmental and social responsibility, and our governments should not allow resource companies, investors and the Canadian economy to be held hostage by extreme minority groups, which use endless court and media challenges to impede progress and nation building,” Wyprysky said.

Michael Fox, a board member of the Canadian Council for Aboriginal Business and chairperson of the Prospectors and Developers Association of Canada’s Aboriginal Affairs Committee, told Mining Weekly Online that there are various political and legal discourses that emanate from the Canadian Constitution.

“When one looks in the Constitution, the crux of the matter when it comes to resources development is that there is a division between various jurisdictions in Canada,” he said.

A member of the Weenusk First Nation, which resides in the northern reaches of Ontario, Fox explained that under Section 91 of the Constitution, the federal government is given jurisdiction over for example the military, banking services etcetera.

Also under Section 92, provinces are given jurisdiction over lands and resources.

Yet, another section within the Constitution also deals with Aboriginal and treaty rights, but there was no list of jurisdictions specified, which left the door open for some people, including Aboriginal leaders and legal scholars around them, to argue that it is ‘a full box of rights’, which includes the right of self governance and self determination, Fox explained.

Conversely, other people argue that this legislation is indeed ‘an empty box of rights', which would be filled one precedent-setting court case at a time.

“This forms the constitutional basis for their vision for self governance. Most of Canada is under treaties where the Aboriginals have surrendered the underlying land title to the Crown; however, large chunks of the country did not sign treaties,” he said.

The only way in which the Crown could legally acquire the titles were through a treaty-making process. The most prominent jurisdiction in which this did not take place is British Columbia.

“Thus, the underlying title is at question. That’s where the ill-defined terms come into play, because part of the Indian Act also guarantees the constitutional protection of Aboriginal treaty rights, which is a part of a bundle of Aboriginal rights, including the right of Aboriginal title,” he said.

While the Supreme Court of Canada is clear that the Crown, which is represented by the federal government and the provinces, has to act in good faith and act in the spirit of reconciliation, acknowledging the fact of pre-existing Aboriginal societies and the sovereignty of the Crown, governments have to try to reconcile those two realities when making decisions about resource development.

“Reconciliation is often accomplished through these IBAs, where the impacts are identified, the communities’ rights are asserted and mitigation and accommodation measures are agreed upon,” Fox said, noting that in some cases, the mining company becomes an extension of the executive by providing essential infrastructure and services to isolated communities as part of its corporate social responsibilities.

“There is a recalibration happening, because of the recognition of Aboriginal treaty rights. Now the issue is to find a sweet spot between companies’ development rights and the Aboriginal Constitutional rights,” Fox said.