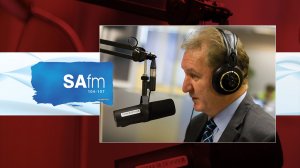 It’s that time again on a Friday when AMLive presents another Update From The Coal-Face with Martin Creamer, publishing editor of Engineering News and Mining Weekly.

Kamwendo: Gold worth hundreds of millions of rands is being recovered on the East Rand from mine throwaways like woodchips and grease.

Creamer: On the road to Daveyton, there is a plant there which is collecting all the throwaways, all the mine muck.  I’m not talking about the dumps, this is mine muck, this is woodchips, this is grease, this is bag material used to carry the concentrate, this is mill-liner material and they got R350-million worth of gold out of that last year. 40 000 ounces by just processing what is a throwaway, and this is such an important thing for the environment, and one that relieves the big mines from having to dispose of this waste. And of course some of them are still throwing away their carbon that can have a grade of 500grams/tonne of gold. So, how does this happen? How does gold get into woodchips? It is because of the incredibly wasteful way that we mine.  We go underground and the roofs of those mines are supported by wood.  This is the way the roof is held up by these packs of wood, and when we blast that precious ore, we scatter little pieces all over the place and they embed in the wood. So, when you take that wood out, it’s got gold in it.  If you process the wood, you get gold. When the mining companies processes their, they use greases because there are mills moving and there is movement in the processing procedure, the gold gets into that grease, you take the grease and you get the gold out of it. As it goes on with bags and with carbon and with all sorts of materials, it can be a rubber lining and you burn that or it can be steel lining and you shot blast that.  So there is a whole lot of different routes to deal with this, but it shows you that there is money in muck, and even more money in gold muck. And after they’ve processed this muck, they still keep that. They don’t call it a tailings dam, but they are calling it a stock dam where they keep the residue, and they’ve now done a study on the value of gold still in that muck that they’ve already processed and there is like 82 000 ounces there.  So now they are asking the government for permission to place the final residue, next to them there is a big open pit and that open pit is problematic because there has been a lot of murders there, because some of the illegal miners enter the underground workings right next door to them through that open pit, so they’ve been to Parliament. Parliament is considering allowing them to put this final residue into this open pit so that can at least be covered up, and stop these killings and illegal mining.

Kamwendo: The once-mighty Anglo American mining company, which is already a shadow of its former self, is intent on becoming even smaller.

Creamer: This is such a sad story. You had this enormous company with hundreds of assets. They were not only in gold and diamonds and any other metal you can think of, they were in anything from Mondi to Mazda and paper and insurance and they were a very big reflection of our economy.  Come the nineties, smart aleck brokers come to them and say, you should list in London.  Always be careful when someone tells you that, and you say, but why must we list in London. We have a stock exchange in Johannesburg that understands that we have a cyclical nature of this mining business, they understand our company, there are investors in it?  But Anglo was told it had to go to London, because that is one the biggest accumulations of wealth, and you can raise capital. They have gone to London, have they ever raised one pound? No. Has London ripped us off of billions of rands? Yes, and they still complain that they’ve got too little. Anglo is now down to something like 42 assets. They say by February it might be 37, and this is on their hundredth anniversary.  Next year they turn one hundred. They were formed in 1917 with money from South Africa and money from America, hence the Anglo American tag.  What has happened to this asset? It has been destroyed.  Have the Australians been so stupid? When we had Gencor in South Africa, it was another company that linked up with Australia’s BHP Billiton, there was also that thing, no you must list in London to form BHP, the world’s largest mining company.  You think the Australians were so stupid?  They said, no way, the primary listing stays in Australia and that’s what we should’ve done, because we’ve got a very good stock exchange here. Why have a company like Anglo decimated through corporate shortsightedness, and fund managers that want money every second, and they don’t put anything in, and when they don’t put anything in what does the company have to do? It has to sell assets, and now in recent times it has gone from 62 assets to 47 assets.  They are still targeting that by next year February to go down to 37 assets.

Kamwendo: Business and labour need to combine to counter the Department of Mineral Resources, which has turned dictator.

Creamer: The Department of Mineral Resources has becoming the Dictator of Mineral Resources, because it has turned dictator. They’ve had a long tradition of working as a collective three-part effort, where you had labour and business and government and government arrive at things like mining charters.  Now the DMR has gone out on a limb.  They gazetted in April and then when everybody said, wow how can you do this?  They said, no we’re going to discuss. That was a charade. They’ve never discussed. Now they are saying that they are going to gazette again, at the end of the year, with an even harsher situation where they take over some of the role of the Treasury.  They want to get billions of rands into their own coffers as part of a new agency which they are setting up with no discussion.  The story is that labour and business have never been closer, now is the time for them to come together and to actually say to the government, you can’t do this.