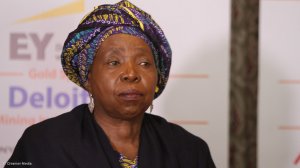 Speaking at the Junior Indaba, the AU head drew repeated attention to the need for a new win-win approach to ensure that Africans benefited from the exploitation of natural resources by the private sector.

She urged private sector mining companies to work together with the government to develop skills.

Lamenting the reality of Africans remaining poor while Africa was mineral rich, the AU head placed great store on value addition and beneficiation within the continent and an end being put to unprocessed minerals leaving the continent as fast as possible.

On illicit flows of capital out of the country, she said that the starting point was the mining contracts signed, which were in favour of companies that had skilled lawyers.

Mining companies had legal budgets that were bigger than the national budgets of the countries in which they were negotiating to mine.

Illicit flows were also contained in additional ore leaving Africa than was documented.

Many of the mining companies claimed losses over long periods of time to avoid paying tax, even though it had been found in some cases that the companies had been making profits over a prolonged period.

“It is important to have business people who are also ethical. If business was ethical, we would not be having illicit flows out of the continent,” Dlamini Zuma added.