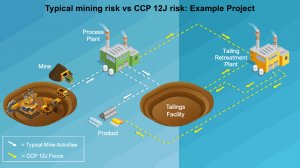 JOHANNESBURG (miningweekly.com) – In an economic environment of tight capital allocation and bank pull back from mining finance, the new tax-incentivised CCP 12J Mining Fund is going all out to raise R750-million for co-investment in ancillary project opportunities on existing mine sites.

The opportunity for investors is to write off 100% of their investment in the CCP 12J Fund and share in expected internal rates of return of 20% and more.

While the tax incentive enshrined in Section 12J of the Income Tax Act is significant, any fund needs both the tax incentive to attract the retail investor, as well as a compelling investment case and CCP 12J has identified an investment gap that can work, even in mining’s current negative regulatory environment.

“In 12J, there’s a particular carve out for mineral exploration and production, and that’s very significant for us because it allows us to build scale. We can make investments of up to R500-million in mining projects,” CCP 12J MD Paul Miller told Mining Weekly Online in an exclusive interview. (Also watch attached Creamer Media video).

What CCP 12J is not looking to do is to invest the money of retail investors into highly speculative mining initiatives.

“We’re looking for opportunities where there’s a brownfield expansion, or a new circuit that’s required, or some sort of additional treatment circuit, or where a mine might be producing more than the plant can handle and you want to expand it and there’s a modular addition - very much minerals processing rather than underground mining or opencast mining itself. That’s the particular advantage we have with DRA in that they have sight of a magnificent pipeline of projects coming out of the major mining companies,” said Miller.

“You can argue as to whether it’s in decline. The fact is, for our remaining careers, we’re going to have a very significant mining industry, with very significant capital requirements,” the former Nedbank Capital investment banker and founding CEO of the once-listed Keaton Energy stated.

It is capital requirements within the mine fence that Miller is looking to help meet. “We’re looking to do that by using the tax incentive being provided to particularly high net worth individuals to invest in these projects,” Miller said.

As a start-up, CPP 12J raised R44-million from third parties in the very same month that it received its South African Revenue Service certificate.

Collectively, it has R194-million, and is going all out to raise more next month, ahead of the provisional tax payment dates, and then engage in another major fund-raising campaign before the close of the tax year next February.

“If you invest in CCP 12J, you can write off the full amount of your investment against your taxable income. If you’re a marginal taxpayer at 45%, that’s equivalent to a 45% buffer on your investment,” Miller explained.

The new mining fund is looking to preserving the capital of its investors.

“What we’re looking at getting is an appropriate risk-adjusted return and then taking advantage of the arbitrage provided by the tax incentive to return a higher rate to our investors in the early 20% internal rate of return-type range,” Miller added.

South Africa’s 12J venture capital regime is seen as being akin to the UK’s venture capital trust regime and fundamentally different to Canada’s flow-through share scheme, which relies on publicly listed junior companies attracting investors, who can then write their investment off against their tax.

South Africa’s National Treasury does not appear to like incentive-receiving investors owning public market shares. All the initiatives introduced by the Treasury, including its tax-free savings accounts and venture capital companies under 12J, are precluded from either investors managing their own money in listed shares, or venture capital companies themselves ultimately being listed.

While Canada’s flow-through share scheme has been integral to the Toronto Stock Exchange having more listed mining companies than any other stock exchange in the world, South Africa’s tax incentives do not have the secondary objective of developing this country’s public markets.

No one shareholder can own more than 20% of CCP 12J, which already has 63 shareholders.

“We’re looking for R750-million. That would be a success for us. We would obviously like to raise more, but even if we raise a billion rand or R2-billion rand, relative to the sustaining capital requirements of the South African mining industry, it’s actually quite small.

“We're looking to recruit investors who are properly advised. This investment has to be held for at least five years. An investor should be prepared to hold it for between five and seven years.

“We’re not looking for investors who might require liquidity in that period. We want some investors who pay the marginal tax rate, so they are significant earners who have funded their pension fund, who have put aside money offshore and then are looking to manage down their tax obligations.

“So, it’s a very specific investor and we would prefer for our investors to actually consult with a financial adviser and get proper advice, so that we get the right kind of investor into our fund,” he said.

CCP 12J’s investment committee is independent to avoid conflicts of interest. There are currently more that 110 12J firms, compared with 38 two years ago and 12 the year before.

Intensive study is said to have gone into putting CCP 12J together, with its team expecting to bringing a competitive alternative source of mining finance to market.

These are all the kind of ancillary, secondary projects on the existing mines that CCP 12J is targeting, particularly chrome from UG2 and recovering PGMs from chrome.

Some million-tonne-a year-production chrome mines are still not recovering the PGM content of their own tailings streams because that was not what they were built to do. The capital required to produce several thousand ounces in concentrate from such opportunities is often relatively moderate. While the concentrate grade is often quite poor, this can be dealt with metallurgically.

There are also gold tailings opportunities in the Welkom area that have the moderate return potential that the 12J tax incentive can amplify, which is why bullishness s growing around CCP 12J's potential.