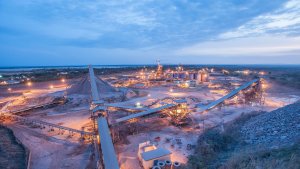 Australian miner Firefinch on Wednesday announced the outcome of its life-of-mine (LoM) plan for the Morila gold mine, in Mali, stating that the mine it bought from Barrick and AngloGold Ashanti last year still had a long life ahead of it.

Morila, which has been producing gold continuously for 21 years, would produce at an average rate of 160 000 oz/y to 2030, through the mining and processing of 37.5-million tonnes at 1.33 g/t gold for 1.45-million ounces of recovered gold.

“We are delighted with the outcome of the new LoM plan, which affirms Morila as a very profitable and long-life mining operation. The rapid ramp up to annual production of 150 000 oz to 200 000 oz highlights the unique advantage that Morila has in leveraging sunk capital,” said MD Michael Anderson.

The new plan is based upon existing drill data, supplemented only by drilling at the satellite pits.

Anderson noted that Firefinch was yet to drill a hole at the Morila Super Pit , which was its main focus. “We are very excited to follow up the many obvious targets with the realistic aim of adding significantly to the current resources and reserves.”

Firefinch also confirmed that, although existing assets were sufficient to provide the power generation capacity required for the mine, the company was engaged with renewable energy providers to install a thermal solar hybrid energy solution to reduce emissions and operating costs.

Renewable energy could provide about 25% of the power required by the operations by installing a 10 MW solar photovoltaic plant, combined with a battery energy storage system.

Firefinch would pursue a build-own operate contracting strategy to allow for flexibility to adjust the renewable/thermal power production ratio as technology improved over the LoM.