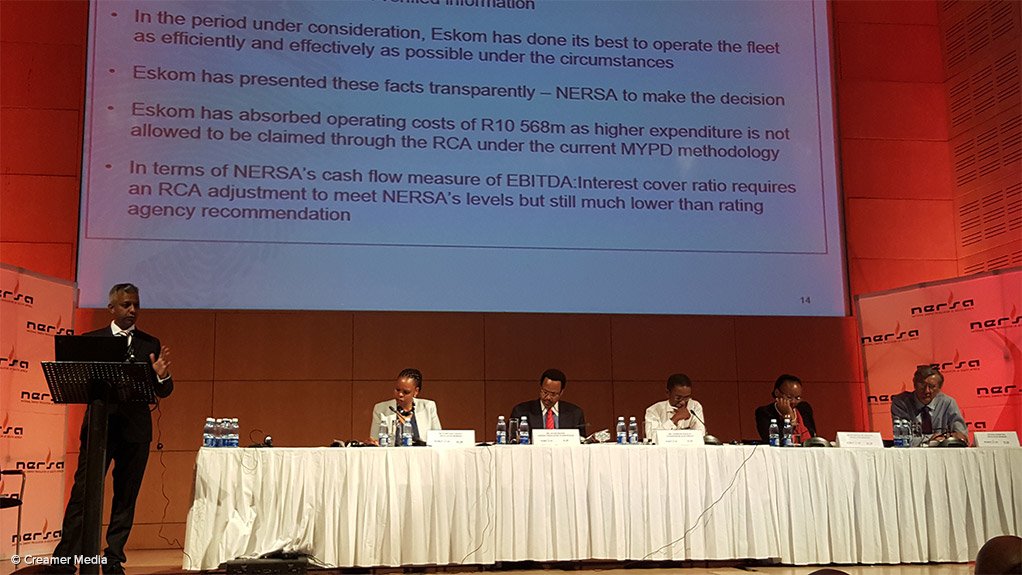 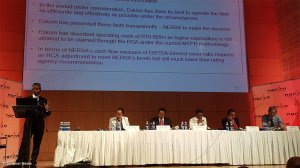 Should its Regulatory Clearing Account (RCA) application prevail, the electricity tariff could rise by nearly 17% from April 1, instead of the 8% already sanctioned for the year and for each of the five years of the MYPD3, which runs from April 1, 2013, to March 31, 2018.

Nersa kicked off its hearings in Cape Town with a presentation by Eskom CFO Anoj Singh.

He defended the RCA submission amid robust questioning by Thembani Bukula, Jacob Modise, Nomfundo Maseti, Khomotso Mthimunye and Dr Rob Crompton regarding the prudency of the additional primary-energy, especially diesel, expenses incurred in the year when compared with those approved under the original determination.

Significant attention was also given to whether Eskom’s estimate of a “revenue variance” of R11.7-billion, arising as a result of lower electricity sales volumes during the period, had been truly ring-fenced from load-shedding, as well as other efforts by Eskom to actively reduce demand during the year.

Eskom sold 194 778 GWh under its standard tariff, as compared with the MYPD3 volume estimate of 208 442 GWh, resulting in lower revenue of R7.3-billion. In addition, the utility said it had received R3.8-billion less in revenue from its negotiated price agreements with the BHP Billiton aluminium smelters, which were spun off into South32, than had been allowed for in the determination.

Questions were raised as to what progress Eskom had made in dealing with the cheap smelter deals, which it had itself indicated were no longer sustainable in the current price environment. In addition, questions were raised as to whether Eskom should be allowed to claw back revenue through the standard tariff for under recovery on the special pricing deals with the smelters.

The application, Eskom insisted, was in line with the RCA methodology and had arisen as a result of a substantial difference between its audited costs and revenue for 2013/14 when compared with that allowed for under the MYPD3 determination.

Singh also stressed that additional costs of R10-billion incurred during the year had been excluded from the application, including take-or-pay coal contracts for the much-delayed Medupi project, which was meant to begin operating during 2013, but only entered commercial operations in 2015. Also not included was R24-million, which Eskom said was its estimate of the loss of sales directly attributable to load-shedding.

A key component of the RCA related to a more expensive primary-energy mix when compared with the MYPD3 assumptions, with a mammoth R8-billion more being spent on diesel used to operate the open-cycle gas turbines (OCGTs).

The prudency of Eskom’s diesel burn emerged as a key focus area for the panellists, with the R8-billion being sought close to the R10-billion approved by Nersa for the entire five-year determination period. In fact, Eskom spent R10.6-billion on diesel during the year, which was significantly higher than the approved level of R2.5-billion.

The extensive use the OCGT plants was justified by Eskom as being more prudent than the alternative of a more frequent use of load-shedding, the economic cost of which was far higher than the cost of diesel.

The utility also argued that its use of the diesel-fuelled power plants, even during periods of low demand, had been technically prudent, as it had improved security of supply and sustained network integrity.

Nevertheless, Singh acknowledged that its attempt to claw-back R8-billion for diesel use in 2013/14 was a “contentious” aspect of the application.

The coal burn variance, Eskom added, was the result of a combination of the positive volume variance of R1.4-billion and a negative coal price variance of R3.4-billion. The utility insisted that it had excluded the R1-billion coal costs relating to the Medupi take-or-pay agreement.

Eskom also included R2.5-billion for additional ‘other primary energy’, which it said was linked to costs for start-up gas and oil and nuclear fuel costs.

The extra nuclear fuel costs arose following a reassessment of the costs associated with the management of spent fuel, which came in R884-million higher than initially estimated.

Nersa’s adjudication process, which includes hearings in all nine provinces that will continue until February 5, would need to assess whether these costs were “prudently incurred” and/or would have been incurred by an efficient, prudently operated utility.

Eskom insisted that the application was not based on forward-looking costs and budget estimates and did not offer an estimate of prudency, which was the “domain of Nersa”.

Nevertheless, the R22.8-billion was a substantial amount, representing nearly half of the utility’s 2015/16 funding requirement of about R47-billion. Should it be approved, it would improve Eskom’s ability to meet its financial commitments, its financial ratios and support its borrowing programme. It would not be sufficient, though, to return Eskom to an investment grade credit rating.

In addition, given the unsuccessful selective reopener of 2015, the RCA application was being closely watched by investors, with Eskom acknowledging that the outcome might prove to be one of the most important factors in determining the price of its bonds and the cost of debt when it again attempted to access the local and global debt capital markets.

However, all the other presenters at the hearing implored Nersa to prioritise South African consumers when making its determination, which was expected before the end of February.

Most also emphasised the weak economic climate and the deleterious effect that higher tariffs could have on the economy, as well as on investment and jobs.

The City of Cape Town’s Dr Leslie Rencontre said any additional increase in the tariff would have a further negative impact on Cape Town’s economy, revealing that the city had already sold 22% less electricity in 2014/15 than had been the case in 2006/7. He said electricity theft had also increased across socioeconomic groups as tariffs had risen over the past few years.

Rencontre urged Nersa to ensure that the 2016/17 tariffs were as close to the 8% determination as possible and also called for urgent resolution, noting that the city needed to make its budget and tariff proposals for 2016/17 available for public comment by the beginning of April 2016.

The National Association of Automotive Component and Allied Manufacturers’ Roger Pitot was more forthright in his condemnation of the RCA application, arguing that, if approved, it would undermine the competitiveness of an industry that had already shed 4% of its 50 000 jobs in the past two years.

Pitot said Eskom had proven itself to be an inefficient operator, with unplanned outages rising and the industry headcount dropping, while sales fell and projects were delayed.

“Eskom is clearly inefficient and is seeking to recover its inefficiencies through the RCA,” he said, while calling on Nersa to end the vicious cycle by insisting on a revised business plan detailing how the utility would migrate from its current position to become a globally competitive power producer.

Similar concerns were raised by Virgin Active’s Grant Scott, who warned that business was no longer able to absorb further tariff hikes, peculiarly given the impact on an already weak South African economy.

Project 90 by 2030’s Happy Khambule, meanwhile, urged Nersa to protect the public by advising Eskom to pursue alternative funding options rather than applying for “massive tariff increases year after year”.