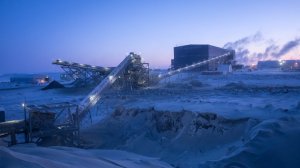 Sentiment in the rough diamond market was “slightly more optimistic” towards the end of 2019 and has remained “relatively positive” as the market prepares for the first selling cycle of 2020, Canadian miner Mountain Province reports.

The company, which is a 49% participant with De Beers in Gahcho Kué diamond mine located in Canada's Northwest Territories, states that the mine closures over the next 12 to 18 months will help establish a more balanced supply and demand equilibrium in the diamond market.

The world’s largest diamond mine, Argyle, in Western Australia, is closing at the end of the year, after it has exhausted its supply of economically viable stones. Industry participants are hopeful that Rio Tinto’s decision to close the mine will kick-start prices that have waned since 2011.

Mountain Province also says that the lower levels of sales reported by major producers in 2019, together with a stronger retail selling season, should help normalise inventory levels in the cutting centres.

Commenting on the performance of Gahcho Kué, he said that the mine had an “exceptional year” of production, achieving all its operational metrics.

The fourth quarter and full-year production results were better than Mountain Province’s expectations, with recovered carats for the year beating the revised guidance of 6.7-million to 6.8-million carats. This was attributed to the strong operational performance of the fourth quarter, during which the plant treated 936 903 t and recovered 1.98-million carats – 25% and 28% higher than was achieved in the corresponding period, respectively. In 2019, 6.82-million carats were recovered.

The average price achieved last year was well below that of the previous year. Diamond Province sold 3.28-million carats at an average of C$84/ct ($63/ct) for total proceeds of C$276.3-million.

"Following the successful plant changes which have created more capacity and opportunity, I believe Mountain Province is well positioned for the next decade. Gahcho Kué has a long mine life, and as demonstrated in 2019 with the discovery of the Wilson Kimberlite, a strong potential for additional discoveries in our highly prospective land package,” said Brown.