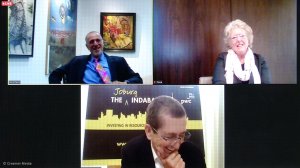 JOHANNESBURG (miningweekly.com) – Major mining companies need to convince investors of the crucial need to replace the value that they are taking out of the ground, mining luminary Sir Mick Davis said on Thursday.

“Every single day that they take something out of the ground, that value disappears forever, and unless you do something to replace that value, you are going to end up withering and dying,” he reminded on day-two of the Joburg Indaba, chaired by Bernard Swanepoel. (Also watch attached Creamer Media video.)

In conversation with Rothschild & Co senior adviser mining Fiona Perrott-Humphrey, the former Eskom, Gencor, Billiton, Xstrata and X2 Resources mining doyen credited mining majors with fundamentally addressing the cost base but said their challenge was to convince their investors of the crucial need to reinvest in their asset base to ensure that share prices did not ultimately decline.

“The majors have addressed the fundamental cost base. All of them have done fantastic work in cutting out significant costs of the operational base and making themselves more resilient as a result of doing that.

“I’ve seen some organisations which have really been in pretty precarious positions and you would have thought that in a point in time they had nowhere to go.

“Essentially, concentrating on the stuff that you can actually do and concentrating on seeing incrementally every day how you can improve things, they have come through, and set themselves in incredible positions.

“A few years ago, Anglo American was in really bad shape and today it’s in an entirely different position. Strong concentration that the team there, led by Mark Cutifani, has had, I think has paid enormous dividends, to use that as just one example.

“So, I think that has been a very, very good exercise of focused management by the industry, and as a result, with their retardation of investment programmes, they have been able to return significant amounts of cash in the form of dividends and capital returns to shareholders, and therefore they have satisfied the needs of the investment community.

“But therein lies, I think, their biggest challenge going forward, that they have not, and boards of directors and management teams generally have not, focused on this very simple proposition, that for mining companies, every single day that they take something out of the ground, that value disappears forever, and unless you do something to replace that value, you are going to end up withering and dying.

“And we have many good examples in South Africa of great mining companies, Rand Mines, for instance – those who are old enough will remember– being a great example. It was once the biggest mining company in the world; today it doesn’t exist, because of a lack of investment in rebuilding and recreating value.

“Some reparation can come about by lowering your cost base so more ore becomes payable in the ground, but mostly this comes from ongoing investments and increasing your optionalities. The ability to create value depends on the options that you have in your portfolio and to recognise when those options should be tackled.

“I fear that this very focused approach on returning cash to shareholders in the form of dividends and capital returns has not, in fact, taken into account the need to sufficiently reinvest, and so they are not creating the optionality, and for most mining companies, that means that unless they do something, their net present value (NPV) going forward is just simply going to show a declining trend and ultimately that will reflect itself in the share price, because NPV and future cash flows ultimately will decline.

“And I think that’s the challenge, and the challenge is there because for them to change that course of action, they need to convince investors that ongoing investment is something that they should be doing. And I just think that the education and almost the propaganda, in the positive sense, that mining executives have to engage in with the investors, on a continuous basis, has been allowed to die away, and there is quite a gulf now between the imperatives of mining companies to continue to create and generate value and the long-term investments that are required for that. I think there's a big gulf there and a challenge that needs to be bridged,” Davis emphasised.

“I totally to agree with you,” Perrot-Humphrey responded. “There’s a fear in the boardrooms of having been accused of capital spend in the past and complete focus now on no capital spend,” she added.