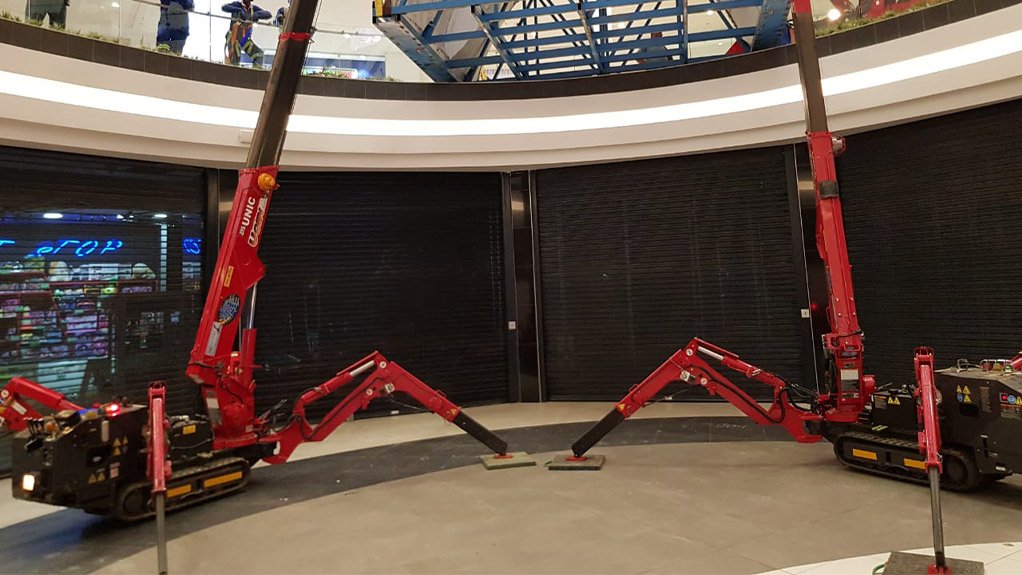 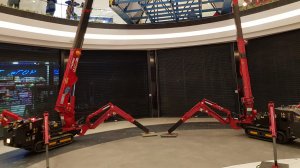 The cranes range from 1 t to 10 t cranes, and many are small enough to fit through doors and into confined construction sites and mine interiors. The performance of the cranes in these confined spaces and in highly technical lifting jobs has led to growing demand from industry as well.

The company has established a new sales, rental and service facility in Sebenza, Ekurhuleni to meet demand, he says.

The cranes are made in Japan and then sent to Europe to have sophisticated computers and sensor systems installed to meet the highest safety standards. The local Unic Spider Mini Cranes business can install additional safety equipment including fire suppression and exhaust-spark arrestors for users.

“We started in 2006 and have mainly been growing by word of mouth. The engineers and technicians who have used our cranes would often contact us when they have to perform a difficult lift or to lift something that normal cranes could not do because of space restrictions and access problems.”

The cranes have a slew of 360°, rubber tracks and a radio remote control, and all the systems can be powered by the diesel engine, electricity from a 3-phase connection or a battery pack.

The computer system ensures that the crane cannot be operated outside safe operating parameters, which include its lift capacity, the distance to the object and the stability of the crane.

“The computer disengages the levers if asked to operate outside tolerances and the crane must be returned to a safe operating position before resumption. This is also why we ask that clients have accurate weight and distance measurements when they ask us to do a technical lift operation,” explains Fogg.

He detailed some of the difficult jobs the company had done using the cranes. In a gold mine, a 2.9 t crane was driven into the processing plant to lift and replace large water valves, reducing the time needed from three hours to ten minutes. The cranes are also used during plant shutdowns.

The company had used two 2.9 t cranes and a 6 t crane in a tandem lift to manoeuvre a large fish tank down from a mezzanine level into an atrium at the Cresta mall. The cranes were also used during the construction of the Mall of Africa’s escalators, and the client used the cranes to hoist his forklifts between floors, says Fogg.

“The versatility of these cranes is astounding and their performance, quality and safety have sustained local demand for them. We have done two construction and industrial shows and events to raise awareness of these cranes.”

The cranes save users time and money because they are able to work underneath roofs without requiring the removal of steelwork, and can be repositioned quickly and easily, enabling them to do more work than is possible using a conventional crane.

“We spotted a niche in the industry for cranes below 10 t. We believe that the growing demand for these cranes and that our customers approach us when they encounter a tricky lifting problem highlights their versatility and cost-effectiveness,” he concludes.

* The use of small cranes in highly technical lifting jobs in construction and mining environments has led to growing demand from industry.

* The compact cranes can fit into confined spaces and have inherent safety features.