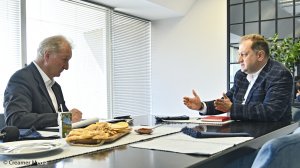 JOHANNESBURG (miningweekly.com) – Private investment and management company Menar, which is planning to invest R7-billion in coal projects in South Africa, is also progressing a gold project in Kyrgyzstan.

The project site is in the south-west of the landlocked country in central Asia, where surface sampling has produced promising results.

“We’ve built the road and we’re going to start drilling in spring,” said Bayoǧlu, who sees gold as a good hedge.

The company’s Kyrgyzstan gold pursuit began with an 80 000 oz gold dump and then advanced to two prospecting rights.

“We’ve finished all the work on the one prospecting right and it looks very promising,” he said.

Centerra Gold of Canada is active in gold mining in the country and a London-listed Russian mining company owns a gold resource contiguous to Menar’s.

Its strategy is to focus on developing its coal projects while diversifying into other minerals.

The group’s first manganese operation, in the Northern Cape, is unfolding, while due diligence is under way on two other manganese projects in the same province.

“We need to do the right thing with the right projects. To establish a mine in a new country is not that easy and it must be worth it to do so. If we find the right project in another country, then yes, we’ll look at it. We’re still interested in Zimbabwe. I think chrome is interesting in Zimbabwe but, again, you need to find something sizeable that’s really worth spending your time to develop.

“What we’re very wary of doing is investing in a country where the goal posts are changed all the time. We don’t want to touch those countries. So, it’s very critical for the mining companies and investors to work in environments where there is rule of law and freedom of speech. These are crucial things and that’s why I believe that South Africa is a very good jurisdiction because there are values here, there are principles and government is very careful about preserving these principles. That’s why we’re still having foreign direct investment coming in,” he said.

At this stage of its growth phase, Menar does not distribute dividends but uses the cash it generates to create new mines. The only outside funding it uses is equipment funding provided by equipment manufacturers.

It engages in concurrent mine rehabilitation and advances with environmental authorisation and water-use licensing. It runs lean operations that can continue when prices are low.

The group expects to be producing 20-million tons of coal from 2021/22 and is prepared to offer Eskom all the coal it produces, depending on Eskom’s needs.

“It’s critical to have coal mines because by 2030, according to the Integrated Resource Plan, Eskom will still have 33 000 MW of coal-fired power capacity, requiring about 100-million to 110-million tons of coal,” Bayoǧlu said.

Menar’s strategy is to focus on developing its coal projects while diversifying into other minerals.

Headquartered in Luxembourg, but overwhelmingly active in South Africa, Menar has been operational for 15 years, five years of which have been characterised by a close working relationship with the large, globally active Swiss trading company Mercuria.