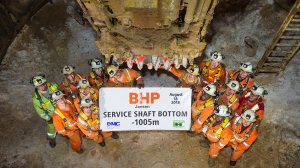 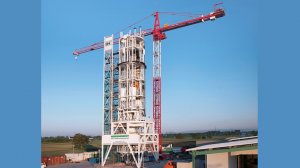 Shaft sinking original-equipment manufacturer Herrenknecht is engaged in numerous feasibility studies with mining contractors in South Africa and other African countries, such as Zambia, for the potential use of the company’s mechanised shaft-boring machines.

While the African mining market works to pull itself out of the doldrums, Herrenknecht has had a number of successes on other continents with its mine shaft sinking product line – particularly its shaft boring roadheader (SBR) machine.

Towards the end of 2018, double shaft sinking began at the Nezhinsky site of the Starobinskoye potash salts deposit in the Lyuban district of Minsk, in Belarus, for potash mining company Slavkaliy.

The simultaneous sinking of the two shafts, which is still under way, is being achieved using two SBR machines designed and manufactured by Herrenknecht and operated by mining contractor Redpath Deilmann.

The SBR machines weigh about 400 t each and are about 52 m high when assembled. Owing to the large size of the machines, they have to be shipped as disassembled components, which are then re-assembled on site.

The machines are designed for the mechanised sinking of blind shafts in soft to medium-hard rock to depths of about 1 000 m, at diameters ranging from 7 m to

12 m – depending on the project requirements.

One of the key benefits of the Herrenknecht SBR design is that, during excavation, no personnel are required on the shaft bench because the system is remotely operated from work decks above the cutting head.

The technology, based on Herrenknecht’s proven vertical shaft-sinking machine (VSM), which can excavate to a depth of about 150 m at diameters of 4.5 m to 18 m, has been used successfully in a number of civil engineering projects. The VSM can advance up to 5 m every shift, owing to parallel work processes that allow for lining the shaft as excavation takes place.

The VSM’s success led to the development of the SBR, which boasts the same parallel work process capability.

The Belarus project marks the second implementation of the SBR technology. The first was for the successful sinking of two blind shafts – a production shaft and a service shaft – in frozen ground at the Jansen Potash Project in Saskatchewan, Canada, owned by mining major BHP.

The two shafts were completed by mining contractor DMC Mining Services, commissioned by BHP, in August 2018, at depths of 975 m and 1005 m. Roos claims it was the first time that mining shafts have been sunk successfully using only mechanical excavation.

He explains that the SBRs excavated the ground through a partial face-cutting method using a cutting drum mounted on a telescopic boom. The excavated rock was then conveyed from the bench by a pneumatic mucking system and transferred into muck buckets to be hoisted to the surface.

The two shafts were lined with primary lining lockbolts, shotcrete and steel tubbings.

A laser navigation system, designed by Herrenknecht subsidiary VMT Group, used target units mounted on the SBR, and lasers connected to the shaft wall, to keep the machines on track.

For the Jansen project, several project-specific design alterations and modifications led to Herrenknecht and DMC Mining Services refining the technology in the long term.

Roos says these kinds of alterations and modifications are almost always necessary, since the demands of each project are different. Moreover, every time the technology is used is an opportunity to improve it for future applications.

For example, the Jansen application led to the SBR being equipped with an additional stabilisation level, allowing for the fixation of the SBR centre pipe on both ends. This ensured a stable transfer of the reaction forces from the cutting process to the shaft wall without movement of the machine.

A third pair of SBRs have been sold to a major mining company for the sinking of two 1 600 m shafts for a large new polyhalite fertilizer mine, in the UK, totalling six SBR machine sales for Herrenknecht since the machines were first introduced to the market.

“The implementation of mechanised shaft sinking technology in mine development not only enhances shaft sinking rates but also significantly increases occupational safety, compared with the conventional shaft-sinking process of drilling, blasting and hoisting,” he concludes.