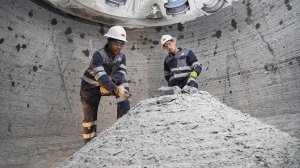 The development of a mechanised shaft-sinking solution for hard-rock applications through rock-boring and drilling services provider Master Drilling’s subsidiary, Master Sinking – a joint venture between Master Drilling and the Industrial Development Corporation – is well underway.

The development of the technology has been divided into five phases to mitigate the risks in establishing the new capacity.

Phase 1, which involved the development and testing of the technology, was successfully concluded in the fourth quarter of 2019.

Speaking at the company’s yearly results presentation last month, which was conducted through live webcast, owing to concerns about Covid-19, Master Drilling director Koos Jordaan said that an experimental project, aimed at testing the technology, took place near Fochville, in Gauteng, in the second half of last year.

The mechanised hard-rock shaft sinking technology was used to sink a 10-m-deep test shaft, with a 4 m diameter, in 300 MPa norite rock, which is about as hard as mild steel.

Jordaan claimed that just less than 1 m/h of instantaneous penetration was achieved using the technology.

“This is of considerable value if you consider the current complexities, safety-related issues, cost and productivity of the sinking industry,” he said, claiming that, although two mechanised soft-rock shaft-sinking projects are being conducted in Europe, no proven solutions exist on the market for mechanised hard-rock cutting or shaft sinking technology.

Phase 2 to Phase 4 of the development of the technology will include the manufacturing, assembly and commissioning of an operational machine, ready for market. Phase 5 will conclude the development process with the first contract being entered into with a client.

Jordaan said Master Drilling had equity and debt funding in review for Phase 2 to Phase 4.

“We hope that we will have a positive outcome and that we can proceed with this in the second quarter,” he said.

The unique intellectual property involved in the development of the technology has been patented globally.

The development of the mechanised hard-rock shaft boring system is in line with Master Drilling’s strategy to limit the interaction between the machines and the people who operate them, thereby improving safety.

Speaking at the presentation, Master Drilling COO Roelof Swanepoel said that, as a result of the company’s increased development and implementation of automation, remote operation and digitisation, lost-time-injury frequency rates fell from 4.54 in 2015 to 2.02 in 2019, which was also down from 2.06 in 2018.

He noted that development of the technology was not enough, stressing the importance of Master Drilling demonstrating its ability to implement it.

For example, the company showed its capability to remotely operate a raise boring machine 3.5 km underground from surface.

“We did it to the extent that we completed more than 20% of production by remote control. This kind of technology helps with operations where one might have to deal with re-entry time, which is ‘dead time’. This machine enabled us to provide production during that time.”

Master Drilling is rolling this technology out to projects in South America, North America, Scandinavia and India.

Swanepoel added that the company boasted about 42 rigs, capable of semi-autonomous control, in its fleet.

“Semi-autonomous control optimises the cutting cycle without the interference of an operator, and it limits the risk if something should go wrong during the operation.”

He noted that the company recorded an increase of about 20% to 30% in productivity on sites where this functionality was implemented.

A fully autonomous control solution has also been engineered by Master Drilling, but Swanepoel said the company was waiting for the ideal project where it could be applied and trialled, and then introduced to the industry.

In terms of digitisation, the company has been running operational reporting since 2017, which provides operational data in near real-time, consequently enabling users to run analytics on the data, and management to make more informed decisions and improve operational efficiencies.

“This capability has been rolled out to the majority of our other operations globally. We are seeing the benefit of that,” he said.

Additional modules are being developed, with the safety, health, environmental and quality module proving to be of most value to date, says Swanepoel.

“This automation, remote operation and digitisation capability is something that we didn’t have five years ago. We have invested in this capability over the past three years and we have seen much value from this initiative,” he said, adding that it has enabled the company to modernise its fleet.

Master Drilling intends to implement all these new technologies, and not just to talk about them, Swanepoel concluded.

Rock-boring and drilling services provider Master Drilling COO Roelof Swanepoel said at the company’s yearly results presentation last month that its performance in the platinum group metals sector had improved in 2019 on the back of its work for platinum mining company Northam Platinum, which included the sinking of a 1 400-m-deep shaft at one of its operations.

“Shafts of this size and depth haven’t been done anywhere else in the world. It’s the first time in mining history that we will do a shaft of this depth and size,” Swanepoel claimed.

He added that Master Drilling was required to drill the shaft within specific accuracy tolerances, which had never been done before, thereby adding to the project’s uniqueness.

Swanepoel said the company hoped to achieve the successful completion of the shaft in the next few months.

“Once we are able to prove that we can sink shafts of that depth with that kind of accuracy, it will open up a completely new market for us with regard to deep shaft sinking in future,” he concluded.