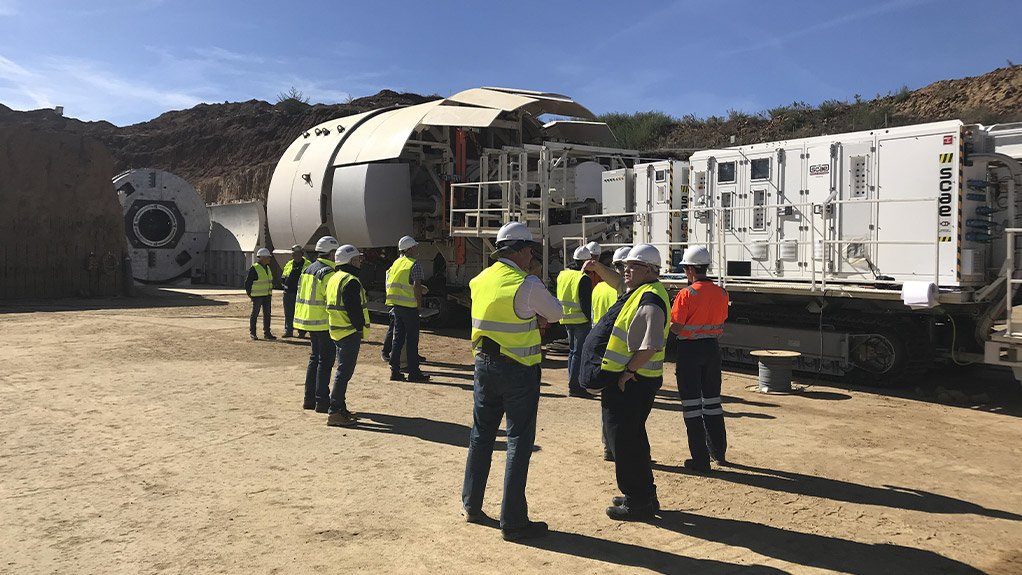 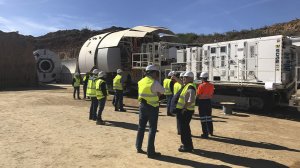 “These two projects can make a significant difference in the mining space going forward. The MTB is going through field testing and the SBS should be market-ready by mid-2021, at the latest, subject to approvals.”

The development of the MTB for horizontal development started in 2017 and the SBS, for vertical development, in 2015, with a promising response from the mining industry to date, Pretorius tells Mining Weekly.

The SBS, which enters its second phase of development this year, is designed as an alternative to conventional shaft sinking. The focus is on safety and the equipment will be able to cut and muck hard rock up to 350 MPa, while shaft reinforcement, lining and other protective measures occur – boring shafts between 7.5 m and 11.5 m in diameter and up to 2 000 m deep.

Master Drilling group business development manager Isak Bredenkamp highlights that, unlike countries such as Australia, which generally have shallow mines, South African miners are having to mine increasingly deeper to access commodities.

A ramp versus a shaft is important during mine design. However, as mines get deeper, declines become too costly and unproductive, necessitating the sinking of shafts. From a certain depth, shafts provide higher production capabilities at a lower operating cost, compared with declines.

“Globally, there is also a scarcity of individuals with the skills and experience to sink or bore shafts. We want to be in a position where we are the preferred provider for shaft boring. If the miners want to access orebodies in a safe, timely and efficient manner, to extract the ore at depth, then a vertical shaft is the best approach. We want to help mining companies achieve this goal using the technologies we have developed.”

The SBS, which requires as few as five people working on the stage behind protective finger shields, can advance up to three times faster than the conventional drill- and-blast sinking method. Safety is also enhanced as none of the machine’s operators are exposed to the face during operation, and the changing of the disc cutters occurs behind the face.

“During site visits from June 2019, key stakeholders viewed concept testing of the SBS and provided good input on the key performance indicators (KPIs) we should focus on,” says Pretorius.

He adds that further design work is being undertaken on the technology as a result of stakeholder recommendations, as is stress testing to gauge how the SBS handles situations such as poor ground conditions, broken ground and flooding. Master Drilling is also engaging with its financing partner, the Industrial Development Corporation, to secure further financing for the machine’s development.

Regarding the MTB, Master Drilling is undertaking field testing at platinum producer Northam Platinum’s Eland mine, in the North West.

“Through our partnership with the client, we have achieved the first KPI put forward by the client, and are in discussions for the second phase of the contract and how we will realise the further KPIs, such as boring at a dip (incline and decline) and turning while boring,” states Bredenkamp.

“So far, things look very promising. All clients obviously wants a technical solution that has commercial and safety benefits, and we are confident that we are on the right track.”

Master Drilling has noted that numerous projects fail to secure investor approval because of the high upfront capital and the long period before a return can be shown.

“Gone are the days when investors would wait 10 or 15 years for projects to become cash neutral and get a proper return on their investment,” states Pretorius.

Mining in the north of Limpopo, in South Africa, West Africa and part of North Africa is expected to be more active going forward, but it depends on political stability, says Pretorius.

Political insecurity impacts on miners’ fiscal environment, says Bredenkamp, pointing to the super inflation in Zimbabwe and its effect on the country’s mining industry.

The policy uncertainty faced by mining companies active on the continent is also a challenge, with jurisdictions such as Tanzania, the Democratic Republic of Congo (DRC) and Zambia either having made or planning to make substantial adjustments to mining law codes.

The focus of these changes is to increase their earning levels from mining operations and to improve domestic economies. Hence, Master Drilling expects an increase in mining tax and royalties, and a higher level of local cooperation on major mining projects.

These challenges are compounded by general issues regarding logistics, infrastructure and security.

Bredenkamp cites the recent attack on Canadian mining company Semafo’s employees, suppliers and contractors on route to the Boungou openpit gold mine, in Burkina Faso, in West Africa.

The New York Times reported on November 6 that gunmen killed at least 37 people when they attacked a Semafo convoy, which was being escorted by Burkina Faso’s military.

In December, Bloomberg reported Chamber of Mines executive director Toussaint Bamouni as saying that, while security adds to operational costs, “investors who know the potential of the country still have confidence that the State can curb the threat”.

Pretorius tells Mining Weekly that Master Drilling is fortunate that, when travelling to gold miner Barrick Gold’s Kibali gold mine, in the DRC, a charter flight is used to transport crews to site.

However, he notes that West Africa is different, with contractors having to travel 12 to 14 hours by road to get to site.

“Different areas come with different rules. I am not sure what will come of the incident in Burkina Faso, but it is certainly something that concerns us, as Master Drilling works in the country,” Pretorius states.

Master Drilling is active across Africa. Therefore, Investing in African Mining Indaba 2020 is an ideal platform through which to engage its current and potential new clients.

“With all those miners in one location, it is the best place to gain an understanding of new developments in the market and available capital expenditure and growth potential,” says Pretorius.