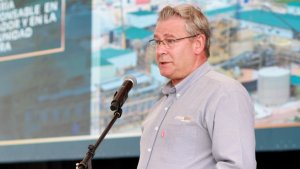 Ron Hochstein, president and CEO of Ecuador-focused Lundin Gold, has been elected to chair the board of Canadian uranium developer Denison Mines.

He is succeeding Catherine Stefan, who served as chairperson for six years and as a director for 17 years.

Denison has also announced the appointment of two new directors – Jennifer Traub, who is co-chair of the mining group at Cassels Brock and Blackwell, and Dave Neuburger, former VP and general manager of Kinross Gold’s Kupol operations.

“This is a very exciting and important time in the modern history of Denison – as the company focuses on advancing its low-cost Phoenix in-situ recovery uranium development project, at a time when the uranium market is showing signs of a sustained recovery,” says Hochstein.