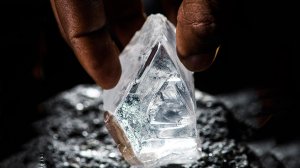 Lucara Diamond Corporation is pleased with the progress and developments it has made during the year to date, with the company doing significant work in Botswana and remaining consistent in quality- diamond production. “We are on track to produce the 2018 production estimate, which is 270 000 ct to 290 000 ct a year,” says Lucara CEO and director Eira Thomas.

Following the recovery of a 327 ct top white gem diamond last month at its wholly owned Karowe diamond mine, in Botswana, the diamond producer will hold an exceptional stone tender (EST) in Gaborone in June this year, where the diamond, among other large quality stones, will be put up for sale.

The company has recovered a significant number of diamonds since the beginning of the year, adds Thomas. Eight diamonds greater than 100 ct have now been recovered at Karowe, including the 472 ct diamond recovered in April, which will also be on sale at the EST. A regular stone tender to sell other stones will simultaneously be held. The company has been building an inventory of large exceptional stones since the beginning of the year, and keeping interested parties informed on the company’s progress using regular press releases.

Lucara has not yet named the stones, as it is consulting employees in Botswana regarding possible names.

Lucara Diamond Corporation has promoted Lucara subsidiary Boteti Mining CFO and director Naseem Lahri to managing director of Boteti Mining. The company announced the promotion earlier this month. Lahri will have oversight in all aspects of the business.

“She has the experience and connections, and these are important to us as a company. This promotion also acknowledges her contributions; she has an important role to play going forward.” Lahri will work on Lucara’s organisational structure in Botswana, as well as drive performance at the mine and the company’s core projects.

She will oversee the prefeasibility study (PFS) of the Karowe underground mine project currently under way. The company is exploring the potential of taking the mine underground beyond 2026 to extend the life-of-mine to 2036.

Based on the positive preliminary economic assessment (PEA) results, the company has continued with the development of a PFS, expected for release in the second half of the year. The PEA was in accordance with National Instrument 43-101 for the development of an underground mine to start production after the completion of the current openpit mine at Karowe.

The company is expecting the combined preproduction costs to be $195-million, including a 25% contingency, the costs of a PFS and feasibility study, hydrogeology and geotechnical testing, as well as modelling.

Meanwhile, Lucara completed the acquisition of digital sales platform Clara Diamond Solutions in March. Lahri will have an important role to play in establishing Clara’s Botswana operations, which will include driving efficiencies, production and ensuring diamond provenance.