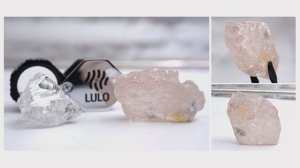 ASX-listed Lucapa Diamond Company says a 170 ct pink Type IIa diamond, recovered from its Lulo alluvial mine, in Angola, is the largest pink diamond to be recovered in the last 300 years.

The company and its partners Endiama and Rosas & Petalas have named the diamond the Lulo Rose.

It is the twenty-seventh diamond weighing more than 100 ct to be recovered from the Lulo concession.

“Lulo is an exceptional alluvial resource and is truly a gift. We are once again made very proud by yet another historic recovery," says Lucapa MD Stephen Wetherall.

Endiama chairperson Dr José Manuel Ganga Júnior comments that this is a significant find for the Angolan diamond industry.

“This record and spectacular pink diamond recovered from Lulo continues to showcase Angola as an important player on the world stage for diamond mining and demonstrates the potential and rewards for commitment and investment in our growing diamond mining industry,” adds Angola Mineral Resources, Petroleum and Gas Minister Diamantino Azevedo.

The diamond will be sold through an international tender to be conducted by Angola State diamond marketing company Sodiam.