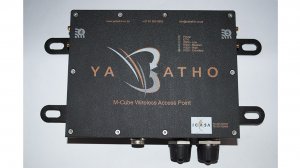 Since the installation of a real-time intelligent location system – developed by global location technology platform company Quuppa – the mine in which it has been installed has reported a reduction in downtime and an uptick in productivity, communications device provider Ya Batho tells Mining Weekly.

The Quuppa Intelligent Locating System, generally referred to as Quuppa, allows for positioning accuracy down to 10 cm, and provides location updates for the fastest of moving objects. It is reliable and robust in the most challenging of environments, says Ya Batho sales and operations manager Craig Franck.

He explains that the Quuppa system has been installed at the tips, production areas, refuge bays and exclusion zones of the mine to monitor the location of the mine’s assets.

The wireless network has enabled operators to log breakdowns and maintenance work on the system, as well as order parts from the stores, all while still underground, and in real time.

A wireless backbone was installed strategically within the mine to allow for two-way communication, video calling and live camera feeds at the tips and on the conveyors.

“Quuppa tags are installed on to trackless mobile machinery, with Quuppa locators installed at designated areas, and will record every time the LHD’s arrive at or depart from said areas, particularly the tips.”

“The cycle and tip times are used to ascertain if production is on schedule, and which vehicles are taking longer than average,” he says, adding that, “by reducing cycle times and increasing the number of tips more ore can be processed at the plant”.

Quuppa tags will also be installed on to the locomotives to monitor where they are in the loop and into which box they are tipping into as well as the number of loads and tips.

Franck points out that the Quuppa system is easy to integrate into existing systems with a pull or push application programming interface (API) that offers standard JavaScript object notation/representational state transfer or comma-separated value formats.

“The API is fully open and configurable, and even comes with an editor, so that clients are totally free to write their own APIs,” he enthuses.

To get the angle-of-arrival data, Quuppa uses either WiFi or a fibre backbone to convey the data from underground to the surface.

Based on the discovery of the superiority of the method, the Ya Batho and Quuppa team developed new algorithms and conducted the extensive research and testing required to solidify the technology into a proven concept.

Data is collected on the Quuppa positioning engine, which is either installed on the mine’s server or on a standalone server.

The engine is the heart of the system, and receives data from the locators, runs it through advanced positioning algorithms and shows the positioning of assets on the mine’s own layout.

“When vehicles or people enter red zones or exclusion zones, an alarm and a notification is sent to the control room or to designated mine personnel,” says Franck.

“The company offers full training, carried out by trained Ya Batho technicians, which is included as part of the installation,” says Franck.

Once installed, the Quuppa and wireless systems usually do not require any physical maintenance.

The system can constantly monitor itself and send an alert to the person monitoring the data, should the unit need any form of maintenance.

The locators have built-in accelerometers, so the system will detect if there is any contact and will perform an automated recovery in the case of a power failure on the system.

The Quuppa system can be used as a gateway to Internet of Things (IoT), receiving and exposing data from Bluetooth sensors.

“As more Bluetooth radio-equipped devices are connected to the IoT, sending out information about themselves and their surroundings, they can all be made visible to the Quuppa system.”

He concludes that, if a device has any activated sensors, data can be received by the Quuppa system and exposed through its open and configurable API.