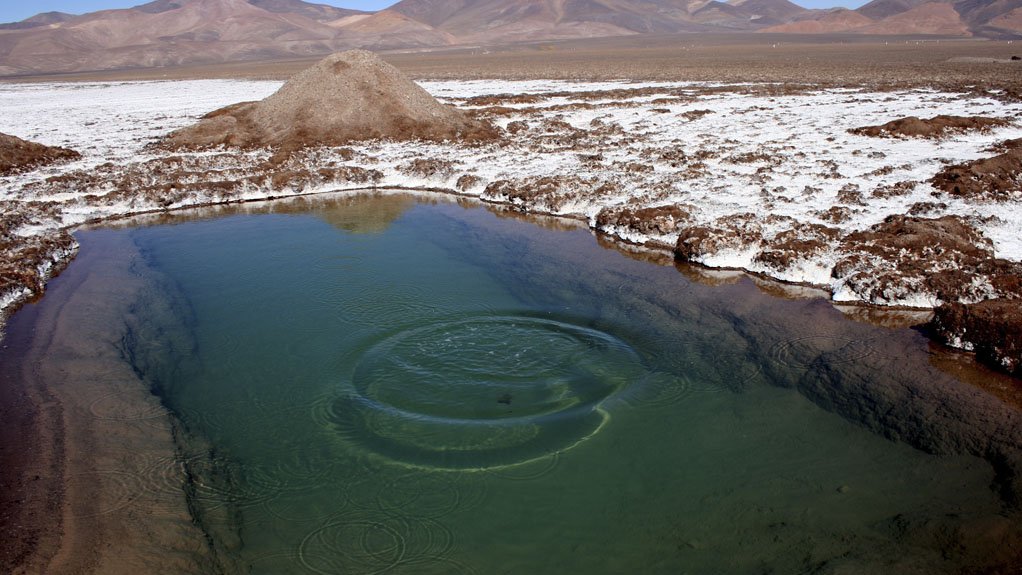 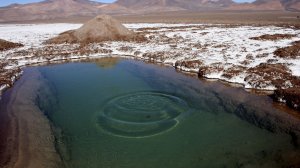 CHANGE-UP Laguna Verde was originally targeted for its surface brines; however, exploration results over the past six months have switched Wealth Minerals' focus to a conventional lithium brine model

Mineral resource company Wealth Minerals has completed transient electromagnetic and gravity geophysical surveys at the Laguna Verde lithium project, in northern Chile, with its geophysical contractor reporting that the data quality is good to excellent for both surveys.

The resulting gravity model suggests a basin whose depth varies between 400 m and just over 1 000 m within the surveyed area. This is consistent with previously reported historical work completed by a third party, which concluded that the basin thickness was about 500 m.

Conductivity variations within this interpreted basin suggest the presence at depth of saline groundwater (potential brine) in lateral proximity to the surface body of water, at an interpreted depth of 200 m to 300 m, with the strongest response at the western end of the lake. A zone of low resistivity is also observed at depth to the north-east of the lake, representing perhaps a (partially) separated volume of saline groundwater.

Wealth Minerals says drill targeting has not yet been completed but initial results suggest up to three shallow drill targets in close proximity to Laguna Verde and an additional drill target to test the interpreted deeper brine to the north-east.

Wealth Minerals CEO Henk van Alphen says Laguna Verde was originally targeted for its surface brines; however, exploration results over the past six months have switched the company’s focus to a conventional lithium brine model. “The recent geophysical survey results are very encouraging. We believe the project has good potential for discovery of lithium brines at depth and lateral to Laguna Verde and the company looks forward to drill-testing priority geophysical targets in the third quarter of 2017.”

In March, the company reported that it had initiated an extensive lake-brine sampling and project evaluation programme at Laguna Verde to determine grade distribution, an independent resource calculation and the preparation of a National Instrument (NI) 43-101 technical report.

The project comprises 23 exploration mining concessions for a total of 2 438 ha. It is located in Region III, in northern Chile, 193 km east of the regional capital city of Copiapo, adjacent to Highway 60 and 15 km west of the border with Argentina.

The work programme announced in March would include a detailed bathymetric (water depth) survey, lake-brine sampling and, in addition, metals and mining solutions provider Tenova Advanced Technologies (TAT) has been tasked with completing laboratory testing on the Laguna Verde lake-brine samples to develop recommendations for process design.

The proposed laboratory process testing of the Laguna Verde lake-brine samples is planned in two stages. Stage one involves LiP, where the removal of alkaline earth elements will be evaluated using the membrane process, while stage two comprises LiSX, where lithium recovery from the resulting brine will be tested.

TAT deliverables will include results of laboratory tests with analytical data, including general composition of the pretreated and waste streams for LiP (from lab-scale tests) as well as product and raffinate analysis for LiSX. Reagent and energy consumption for LiSX and LiP respectively will also be quantified and recommendations will be made for a scaled-up mini-pilot configuration.

An order of magnitude cost-estimate study will be used to evaluate the capital expenditure and operating expenses for producing 20 000 t/y of lithium carbonate equivalent (LCE) lithium hydroxide monohydrate.

An NI 43-101 technical report dated May 5, 2010, prepared by John Hiner for acquiring, exploring and developing properties company Pan American Lithium (renamed to First Potash Corp in 2012) disclosed an inferred resource of 512 960 t of LCE and about 4.2-million tonnes of potassium chloride equivalent. However, Wealth Minerals notes that the depth of historical water sampling was limited to 15 m below the lake surface and limited the magnitude of resource estimation, which was extrapolated to only 33 m.

“It is extremely exciting to have initiated this comprehensive project evaluation programme at Laguna Verde,” Van Alphen stated in March. “We believe that the project offers a unique opportunity where known technologies can be applied to a comparatively less complex lithium deposit.”

Wealth Minerals has also signed a letter of intent with Atacama Lithium Chile in connection with the grant of an option to acquire additional exploration mining concessions for $4-million and the delivery of an aggregate of five-million common shares in Wealth Minerals. The concession comprises an aggregate area of about 6 300 ha surrounding the Laguna Verde project and comprising the Salar Green and Union projects that, if exercised, would bring Wealth Minerals total land position in and surrounding Laguna Verde to about 8 700 ha.