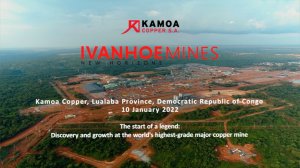 Canadian miner Ivanhoe Mines has set its sights on producing between 290 000 t and 340 000 t of copper in concentrate this year.

The project has been ramping up its processing capacity as part of Phase 1. Phase 2 expansion is 80% complete and will start operations in the second quarter of the year.

Phase 2 will take the plant’s nameplate milling capacity to 3.8-million tonnes a year.

Ivanhoe co-chairperson Robert Friedland says Phase 2 remains significantly ahead of schedule and that the project is well on its way to doubling its annualised copper output to more than 400 000 t starting early in the second quarter – vaulting Kamoa Copper into the ranks of the world’s ten largest copper mines.

Phase 3 of the concentrator expansion is targeted for 2024, with earthworks to access new mining areas already under way.

"Our outstanding team of geologists is confident that the Kamoa and Kakula mines are just the initial discoveries of a major new mining district, which extends the storied African Copperbelt in a southwesterly direction all the way to the Zambian border.

“We will be conducting an extensive drilling campaign on our majority-owned Western Foreland exploration licences this year to unlock the potential of this highly-prospective ground,” Friedland says.