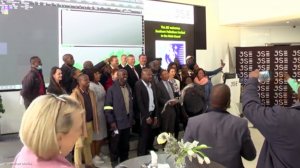 JOHANNESBURG (miningweekly.com) – The first in-person listing on the Johannesburg Stock Exchange since Covid heard the African kudu horn serenade an opening bid of R6.90 a share for platinum group metals (PGMs) company Southern Palladium, which on Wednesday took its place on the JSE’s main board as a secondary listing under the SDL code.

It did so shortly after the JSE recounted its rousing journey from a mining tent 135 years ago to a trading pace that now averages 300 orders a second and 20 million orders a day. (Also watch attached Creamer Media video.)

Southern Palladium MD Johan Odendaal highlighted the newly listed company’s tight arm-locking with the admirably persevering Bengwenyama community, of the Steelpoort/Burgersfort area, which hosts one of the largest remaining shallow platinum deposits on the eastern limb of the Bushveld Complex. Bengwenyama-ya-Maswazi is a major partner with a 30% direct interest and further indirect ownership through a 12.3% shareholding in Southern Palladium.

The timing of the tide-turning listing coincides with a world needing PGMs as it cleans up its act still further by transitioning to clean and green energy.

Alicia Greenwood, the CEO of JSE Clear – the entity within the JSE group that is responsible for the risk management, clearing and settlement of all transactions in the equity, currency, interest rate and commodities derivatives markets – emphasised the advantage of the exchange's deep liquidity, which, she said, “means that a lot of people are interested in trading the companies on our exchange”.

JSE trading operations manager Martin Koch spoke of the exchange’s trading engine literally functioning as fast as the speed of light and how the R6.90-a-share orders for Southern Palladium were being sent flashing across the rest of the equity world in a minuscule 300 milliseconds.

“Almost faster than you can blink, that information has hit London, Singapore, New York and wherever the JSE shares are distributed,” added Koch.

“We hope that listing on our main board is the beginning of another prosperous chapter in your company’s history and that it serves as a springboard to your next phase. We look forward to a long and mutually beneficial journey,” stated Fourie.

“At the JSE, we remain very committed to creating an effective environment for companies such as Southern Palladium to raise capital and to grow,” Greenwood said at the event covered by Mining Weekly.

“These are the celebrations that really get to the crux of what we do at the JSE,” said Greenwood, who added that the JSE team had returned from last month’s Investing in African Mining Indaba “so pumped up and excited by the level of debate and the plotting, planning and activities that the mining community has for its sector” – a sector that is responsible for the JSE coming into existence.

"Certainly, coming away from those Mining Indaba forums, we were very excited to play a role in supporting mining to reach those goals - to play a role in providing a platform for mining companies to raise the capital and the money that you need to drive those dreams into realities."

The robust JSE, Greenwood added, was also a good venue of choice for companies seeking secondary listings, particularly when those companies were already in jurisdictions such as Toronto, the UK and Australia.

JSE head of origination and deals Sam Mokorosi, who served as master of ceremonies, last week highlighted two new far-reaching JSE advances at the exploration-focused 2022 Junior Indaba, notably the provision of the exchange for the raising of capital in the private market and also its new red-tape cutting initiative aimed at easier, faster and more sustainable listings.

Southern Palladium estimates a metal basket price for sales for the upper group two (UG2) site is about $3 331/oz while metal mined from the Merensky reef in the orebody would be about $1 994/oz, based on current prices. The UG2 has a resource grade of 7.7 g/t, which is said to be comparatively high for the eastern limb.

The dual-listed company, which trades on the Australian ASX under the code of SPD, raised A$19-million as part of an over-subscribed initial public offering. The funding raised is earmarked for drilling for additional resource definition and a prefeasibility study.