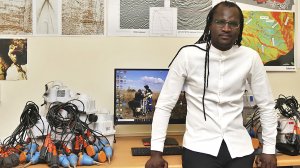 JOHANNESBURG (miningweekly.com) – An innovative wireless sensor method of mapping the subsurface of the earth could make exploration cheaper and mining safer, says Professor Musa Manzi, the award-winning director of the Seismic Research Centre of the School of Geosciences at the University of the Witwatersrand.

The method, which received acknowledgement in the latest series of NSTF-South32 accolades, has been under test since December.

“As I’m talking to you right now, I’ve got a bunch of students in the corridor preparing these sensors for another project in a platinum mine.

“We’ve received some good acceptance from a series of mining companies in South Africa. If some haven’t heard about what we’re doing and our approach, we’re contactable and can have a chat,” Manzi said.

Mining Weekly: With the help of your research, how can South Africa make exploration cheaper and more environmentally friendly?

Manzi: We believe that to be able to make exploration cheaper, innovative and environmentally friendly, you’ve got to go to the core of innovation and development. The whole idea of the seismic research centre is to develop innovative and environmentally friendly and cost effective tools, particularly in the area of reflection seismology, because reflection seismology is one of the accurate geophysical methods to map the subsurface of the earth but most importantly to locate the ore deposits – gold-, platinum-bearing horizons all the way down to about 4.5 km – and that’s not easy. (Reflection seismology, or seismic reflection, is a method of exploration geophysics that uses the principles of seismology to estimate the properties of the earth's subsurface from reflected seismic waves.) I will start with the cost-effective manner. Traditionally, one has to have an active source. We often induce energy using big trucks on surface. Generally the method is surface based, which means that you induce energy using these big trucks and you’ve got sensors that are cabled on surface. The energy will propagate through the rocks in the form of seismic waves, all the way to a depth of about 4.5 km, where your gold-bearing horizon might be allocated. Then these waves will bounce back to the surface and be detected by these cable sensors. What happens you’ve got to analyse the time the waves took to go down and come back on these sensors and get a picture of the subsurface of the earth. It gives a structural architecture of the mining environment. Now, the issue is these virbroseis trucks for geophysical prospecting are not available in South Africa. They are very, very expensive and most companies don’t do seismic surveys because of the budget and also a lot of cost comes from the fact that it takes at least two to three days to make out the cable sensors on surface. A third point is that it’s not always possible to put sensors on surface because of the mining infrastructure. So, those issues completely eliminate the possibility of doing accurate seismic surveys for exploration. This is where myself and my team came in. How can we then ensure that we continue mapping the subsurface of the earth, mapping the orebodies but in a cheaper way? What we’ve done is we’ve worked with our partners to develop wireless sensors, which means that you do not have to connect the cables. You place these sensors on surface first. You lay them out. The beauty of these sensors is that they can record continuously up to about 52 days, which means that you are able to monitor them in time. This means that you eliminate a big number in the field because you don’t need a lot of people but also we don’t use an active source, we use the ambient norm as the mine is blasting. It is cost-effective because the mine will not stop production to do exploration. The mine will continue blasting and crushing and we use that energy as a source, which we call the passive method. We analyse the ambient noise and then we get the subsurface image of the mine. Then we’re able to locate the geological structure that compartmentalises the orebody underground. Also, we are able to map the orebodies ahead of the face, which is critical for mining. In that way, you can use these wireless sensors in the environments that have no access, for example, where there is infrastructure, you can still put your sensors between the buildings whereas if they are cabled, you cannot put your trucks in between the buildings, also you cannot put the cable sensors in between the buildings. In some of the cases, you find that your areas around are mountainous. You cannot really drive there. But you can place these sensors on the mountainous areas and then all you need is that traffic noise, anything that’s passing by that’s generating noise, then we capture that as an ambient noise, analyse the wave through it and then we analyse the subsurface of the mine. We can assist the mine by identifying the orebodies as well as identifying the structures that may be prone to mine seismicity and rockburst.

Can South Africa get going immediately by placing off-the-shelf wireless sensors on surface and in mine tunnels?

We have been doing this work since December. We’re collaborating with the advanced orebody knowledge programme under an organisation that is run by the Mandela Mining Precinct, plus international collaborators. Last year in December we used this system for probably the first time in South Africa whereby we went to Maseve platinum mine, we accessed the tunnel, we placed the sensors. We’re also collaborating with the Council for Geoscience, which is drilling for potential shale gas in the Karoo. In June this year, my university colleagues, my students, and other team members, placed these sensors to map down to about 2.5 km. The system and our approach is available right now. We’re doing multiple tests. But I need to emphasise that we’re not trying to replace active seismics because they all come with advantages and disadvantages. I’ve already highlighted the advantages of having passive seismics as one of the approaches because you can do it almost anywhere and you don’t have to have the expensive sources to generate energy for them – and they can work inside the mine tunnels. You can design some of the sensors to put in exploration holes, which means you can do what are called tunnel, surface, borehole seismic imaging. This means you can have high resolution imaging of the subsurface.

How can your system’s early warnings of seismic risk help to make mining safer?

That’s a very good point. Remember now one of the issues is that with these wireless sensors, we can use them in what we call a GPS-denied environment. We’re talking about inside the mine tunnels. How geophysically sensitive your method is depends on the depth. The further you are from the target's depth the less resolution you get. If we bring these sensors to the mining tunnels, areas that are known to have no GPS signal, we develop a GPS-time system whereby we can synchonise the wireless sensors inside the tunnel with those that are on surface. We know in South Africa we mine at the depth of about 3.5 km sometimes, which exposes the miners to mining-induced seismicity. As they mine, some of the structures can be reactivated. By having these sensors closer to those structures we’ll be able to map the structures ahead of the mine. If there are structures that are seismically active, we’ll be able to provide some information to the mines and say in this particular area we’ve got structures dipping in a certain way. This means that the mine can improve its mining methodology as well as their drilling programme based on that, and thus mitigate the risks that are associated with mining. Mines do not only face mining-induced seismicity. They also face methane explosion risk and in some of the cases we find that the methane together with water travel along these structures in the mine. With this system, we’re able to map the fracture network, then collate those fracture networks with the migration of the fluid underground so that we are able to tell that these are the structures that are prone to fluid and methane migration, because if we can identify those structures ahead of the mine, we can probably then identify there is the reservoir for that gas as well as for the water. Then the mine can easily plan dewatering strategies and ventilation systems much better to mitigate the risk associated with methane explosion. The other information we get from this innovation is that you can get the velocity model of a mine because you’ve got sensors on surface and also inside the mine tunnel, which means that we can map the rock mass between surface and the tunnel, which was not possible with the conventional method. You get the velocity model to accurately locate the seismic hazards in the mine. One of the issues is that the locations are not accurate for those events because of the poor velocity model. In this case we’ll provide some information that will be used by the mine rock engineers to better locate seismic events in the mine and therefore protect miners. So, we cover two things – we discover orebodies and at the same time protect mineworkers in mining environments.