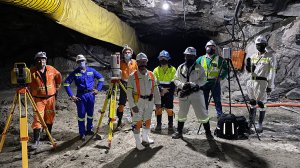 Of the initiatives and programmes implemented by the Mandela Mining Precinct, its industry test mine has garnered the most interest and positive sentiment from mining companies, universities and other interested parties.

“About 40 companies have already expressed interest in using the real-life environment offered by the industry test mine when it is commissioned,” says Mandela Mining Precinct Test Mine manager Jurgens Visser.

He notes that a technical steering committee has been established for the industry test mine, adding that the facility should be available to interested parties by mid-year.

The industry test mine, which was selected following a site feasibility study conducted by SRK Consulting engineers, is situated near Rustenburg, in the North West.

Visser says the mine’s proximity to Gauteng enables companies and manufacturers based in the country’s economic hub to conduct testing at the mine – for a day or for any period of time.

“The industry test mine will allow for new technologies, machinery and concepts to be tested in a real-life mining environment.”

The mine is in the final stages of its risk, legal and feasibility studies, after which the industry test mine will be made available for companies requesting to use the facility, Visser notes.

“The industry test mine will be an optimal platform for South African and international mining technology to be trialled and showcased to prospective clients or manufacturers,” he states, adding that the fully equipped mine, which has been placed on care and maintenance, will still benefit the industry, despite it no longer being a viable ore-producing mine.

He stresses that it features all the characteristics of an operational mine and will be maintained as such.

Furthermore, with its challenging orebody, it will offer a realistic environment for products being tested.

Visser says the mine has been used for in-house testing by the precinct in the interim, which has shown great promise amid much excitement.

He concludes that the industry test mine will offer a platform for South African and international manufacturers and clients looking to test the capabilities of their products in the local mining sector.