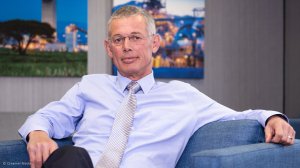 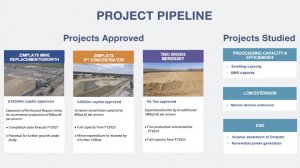 During this week’s presentation of record financial results covered by Mining Weekly, Muller calculated that the amount of capital expenditure (capex) required for the growth projects would be R5.7-billion for the expansion of the Two Rivers PGMs mine in South Africa and about R6-billion for replacement and growth investment at Zimplats in Zimbabwe.

Muller said that the first of the three projects still being studied is focused particularly on downstream beneficiation in the form of additional smelting capacity as well as increasing the capacity of the base metals refinery (BMR) in South Africa. (Also watch attached Creamer Media video.)

The second project study centres on life-of-mine (LoM) extensions, and the most near-term project is a feasibility that is being prepared for board consideration in November. This involves an extension to the decline of the Marula mine, in Limpopo, to provide an additional ten years to Marula’s current 13-year LoM.

The third project under study is an environmental, social and governance, or ESG, capital investment. Most noteworthy is sulphur abatement at Zimplats and Implats' ambition to achieve carbon neutrality in 2050 through increased consumption of renewable power.

While these studies proceed, three projects at a capital cost of close to R12-billion are getting under way following board approval.

The three projects approved and under way include:

The Two Rivers Merensky project is in the early stages of development. The aim of this project is to ramp up the production capacity of the Two Rivers mine by 180 000 oz of six element (6E) output a year.

First ore from the Two Rivers Merensky project production is expected in 2024 and full capacity in 2025.

This project is in the early stages of development. Site preparation, in the form of geotechnical assessments and surveying, is being carried out for the additional concentrator plant and procurement for the decline development on the Merensky reef horizon has been initiated.

The expansion of the Bimha and Mupani mines for the incremental production of 80 000 oz/y of 6E output represents the first phase of the expansion. The new concentrator will have all the internal mechanics to process 180 000 oz, other than the front end required to treat ore in addition to the 80 000 oz.

“In order to do that, all we have to do is provide facilities to receive the additional concentrate and the front end, which comprises of a crushing circuit.

“The expansion of Bimha and Mupani accounts for the 80 000 oz and we are currently evaluating different options for the additional 100 000 oz to bring the full expansion eventually to 180 000 oz,” said Muller, who calculated total capex of about R6-billion, which compares with the R5.7-billion approved for Two Rivers.

The Johannesburg- and New York-listed company's record financial results for the 12 months to June 30 were the result of higher volumes being sold into a strong PGMs pricing environment.