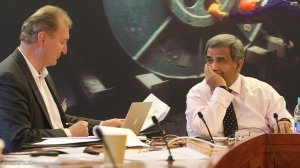 JOHANNESBURG (miningweekly.com) – The occupation by illegal miners of part of the Obuasi gold mine, in Ghana, is slowing the feasibility work AngloGold Ashanti is undertaking for the modernisation of the troubled operation.

Obuasi’s first half of 2016 has been dominated by the incursion of illegal miners on to the operating area, despite extensive engagements with the authorities at all levels to re-establish law and order.

The mine has been placed on care and maintenance, with only essential dewatering, ventilation and water treatment activities being undertaken.

Speaking at a media conference ahead of the company’s presentation of results, Venkat noted that while Ghana was one jurisdiction where law and order had never been in question, there was still no end in sight for the illegal occupation, despite continuous engagement with the government for the restoration of law and order. (Also watch attached Creamer Media video).

A positive development was the relatively peaceful removal of illegal miners by government security forces when they tried to enter the deeper, high-grade areas of the mine and AngloGold alerted the government on the long-term negative impact such occupation would have.

The government has also established a movement committee that aims to relocate and regularise the illegal miners into artisanal miners on other premises.

“The engagement is still ongoing but the progress is frustratingly slow,” Venkat told journalists, adding that this was one of the reasons why the company had proceeded with arbitration while still engaging with government day-to-day.

Under normal circumstances, AngloGold would have hoped to have had the feasibility study completed and updated this year, and agreed an investment with the government, but there is little chance of that happening now.

It would also normally have spent close to $120-million this year on Obuasi, but instead, expenditure is now more likely to be $55-million to $60-million because of the work that could not take place.

“We have updated the feasibility to the extent it can but until law and order has been restored and we are able to actually go back on to the site and assess what damage has been caused for feeding back into the model, there’s very little we can do at this stage. We have to wait and see the outcome of the current engagement,” Venkat added to Mining Weekly Online.

Ghana’s elections are scheduled for early November and the company will probably have to wait until year-end for an outcome.

The arbitration case has been registered by the International Centre for Settlement of Investment Disputes, an international arbitration institution headquartered in Washington, in the US, which facilitates dispute resolution between international investors and host States.

The arbitration case was introduced on the fears of “increasing lawlessness, trespassing, property damage and threats to employee safety” forcing the withdrawal of all essential site personnel, including those operating the mine’s critical underground water pumps.

In February this year, AngloGold Ashanti executive VP Graham Ehm flashed a tenement map on to a large screen at the company’s presentation of results in Johannesburg to illustrate that at that stage, illegal mining was only taking place at the small northern extremity of the tenement – a situation that has changed radically, with illegal miners now in underground tunnels and areas hosting key infrastructure within the mine area itself.

The worsened situation took place despite AngloGold agreeing to reduce the size of its tenement by 60% to accommodate illegal mining, which has been causing considerable disruption across Ghana.

In early 2013, the spread of illegal mining prompted the Ghanaian government to implement a programme to remove the so-called galamsey tenements across the country, including at Obuasi.

Through the Chamber of Mines, the Ghanaian mining industry entered into an agreement with the government to provide ongoing security support to supplement mining company efforts to secure property and mining leases.

But after supplementary security forces withdrew, the company’s communications manager, John ‘Big John’ Owusu, was fatally injured on February 6 after being hit by a retreating vehicle that had been confronted by an aggressive mob.

As a consequence, all noncritical personnel were removed from the mine.

As reported in Mining Weekly in April, Ghana Chamber of Mines external relations and communications director Ahmed Nantogmah expressed the hope that enforcement of the new Minerals and Mining Amendment Act would do much to reduce the onslaught of illegal miners on mining concessions in Ghana.

The Act, which was passed in 2015, prohibits every form of illegal mining and criminalises mining without a licence.

It also mandates the judiciary to confiscate the equipment used in illegal mining, along with the products of such activities.

But enforcement is not taking place and the impact of illegal mining activities is being worsened by the increased use of heavy machinery by the illegal galamsey miners, who are using mechanisation to boosted their production rate.

At Obuasi, the presence of illegal miners on the mine’s operational footprint, in its underground tunnels and in areas hosting key infrastructure is impacting directly on AngloGold’s ability to continue to perform even the most essential services, including the treatment of water for pollutants.

If allowed to continue unchecked, this illegal occupation of the lease area will threaten the long-term viability of the mine, as AngloGold Ashanti Ghana might be forced to withdraw all essential personnel currently on site, including personnel operating the mine’s underground water pumps, and suspend critical services to the community.

Until the temporary suspension in 2014, underground production at Obuasi had been continuous since 1897.