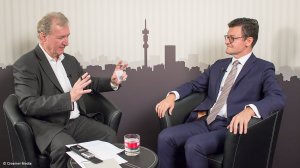 Of all the platinum demand levers, platinum in jewellery is the one that can be activated the quickest and the most directly, which is important in light of the need of the struggling platinum industry to continue to create demand for platinum, so that upward pressure is applied on the currently low metal prices being achieved by PGI's funders – Anglo American Platinum, Impala, Lonmin, Northam, Sibanye and Royal Bafokeng Platinum.

With more marketing, significant incremental ounces would be demanded of the mining industry, which would add tension to the price and benefit the millions of South African people dependent on a successful platinum business.

Since 2001, investment of $800-million in jewellery demand has created 35.5-million jewellery ounces, worth $7.3-billion, but, given the huge opportunities, far more demand could be generated with greater investment.

Given the contribution of platinum group metal mining to the South African economy and employment, jewellery that makes use of platinum has become profoundly important to the wellbeing of South Africa.

But in recent years, funding for jewellery development has declined.

With the economics of the platinum-mining business being extremely tough, the platinum companies have done an amazing job at staying committed to this model – but the South African economy stands to lose out badly if extra funding for marketing is not raised.

The platinum mining companies, under the circumstances, have done a stunning job, but they need to have the wherewithal to continue their astounding performance and do all they can to capitalise on marketing opportunities for the benefit of all their stakeholders.

In China alone, people buy 12-million pieces of platinum jewellery a year and millions more ounces are possible from China.

“We reckon there’s at least another 3.5-million ounces that could be generated,” he says.

Platinum is a more secure setting because the metal’s significant density holds gemstones more securely and it is calculated that conversion into platinum in the US of only the heads that hold the diamonds on engagement rings would generate another incremental 150 000 oz of demand.

“It’s a really interesting opportunity for South Africa to step back and look at the great value it has in brand platinum and examine the upside potential of greater investment,” says Daniel.

China, platinum jewellery’s biggest market, is a hybrid market, with saturation having been reached in the big tier-one cities, but he tier-three and tier-four cities offer huge ‘white space’ for platinum.

There are three main tier-one cities in Shanghai, Beijing and Guangzhou, the provincial capitals make up 20 tier-two cities and there are 250 tier-three cities.

Platinum jewellery demand is growing rapidly in the 15 to 20 tier-three cities in which PGI is active, but the constraint is the finite marketing budget, exemplified by PGI no longer operating in Europe because of budget prioritisation.

Platinum used in jewellery is 99% pure compared with 18 karat gold, which is platinum’s direct competitor in the jewellery space, being 75% pure. Platinum is also 60% more dense than 18 karat gold.

Even when the platinum metal price is lower than the gold price, the per piece price in the showcase is invariably higher priced than its gold counterpart.

PGI cites design as the primary driver of consumer desire for platinum and in the US and Japan and increasingly in China, the platinum is adorned by gemstones.

The fastest growing segment of the jewellery market in China is the gemstone niche, but for platinum it represents only 20% of unit sales, which means that 80% of unit sales are still in plain metal jewellery including rings, pendants, earrings and bracelets that have no gemstone content at all.

But generally, when you look at jewellery markets, they evolve when middle-class consumers come on stream, become more affluent and then aspire for diamonds, and platinum has, historically, always been seen as the safest setting for a diamond.

In a nutshell, PGI has a single-minded strategy that keeps the consumer front and centre.

“Nobody knows the platinum consumer like PGI does,” says Daniel.

This knowledge is the organisation’s intellectual property, and is what it uses to add value to the jewellery industry.

Its marketing activities are amplified by 70 manufacturers and 1 200 jewellery stores.