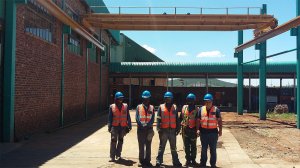 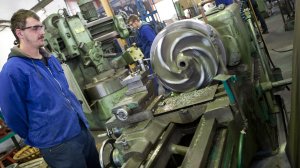 UP-SKILL The company continuously up-skill employees on all levels by offering the opportunity for training
PROTECTIVE FEATURES This range has specialised protective features to ensure that the stator winding will never burn out
BY: Mc'Kyla Nortje
Journalist

“We are erecting a 12.5 t crane, which will serve 330 m2 in a new workshop,” explains Wehmeyer. The crane will be used to handle the excessive weight of the bigger pumps.

Wehmeyer explains that, based on the successful operation of the Hippo flameproof submersible slurry pumps range delivered to refinery company Targa Resources in Houston, Texas, in the US, the pumps are now manufactured to comply with the IEC 060097/1: 2005 flameproof specifications.

Wehmeyer tells Engineering News that 65% of Hazleton Pumps’ products – all locally manufactured – are currently exported to countries such as the US and Canada.

Hazlelton Pumps has noted increasing demand for its Hippo flameproof submersible slurry pumps range, which has specialised protective features, such as the stator housing being filled with oil, dissipating the heat from the electrical winding to ensure that the stator winding will never burn out, owing to either overheating or the failure of mechanical seals.

Another feature is that it is essential to have a flameproof electrical control panel installed as close as possible to the pump. The control panel needs to have, firstly, overload protection, secondly, a sensing device to measure when the mechanical seals should fail and, thirdly, a relay suited to the thermistors to prevent the electrical winding overheating.

The pump is still regarded as the world leader when pumping acidic liquids containing solids at high heads and high volumes, according to Wehmeyer.

Meanwhile, Hazlelton Pumps continuously tries to upskill its employees on all levels through training either in-house or at other institutions.

“To facilitate staffing requirements, efforts are made to source staff from the local community it operates in, and unemployed youths,” explains Wehmeyer, adding that these individuals are trained to suit the company’s operational needs in various departments.

The programme is at least two-and-a-half years, and most apprentices qualify within three years. Currently, ten apprentices are enrolled and the company will add five new apprentices to the Merseta training programme by the end of June.

“To complete the training programme, the apprentices have to undergo independent testing to obtain Merseta certification, which would then qualify them as either a millwright, electrician or fitter and turner.”

Wehmeyer explains that, after the completion of the certification, most of the apprentices are offered employment. However, the apprentice is not obliged to accept the offer.

“The skills required by Hazleton Pumps and the pumps industry in general are rather industry specific; the apprentices are trained to fill the gap for these additional skills.”

One of the challenges Hazleton Pumps was faced with when the first Hippo flameproof submersible slurry pumps range was exported to Canada in 2003, was that the Canadian Standard Association (CSA) does not recognise the South African Bureau of Standards (SABS) as an internationally accepted accreditation body.

“The pumps had to be re-certified by the CSA in Canada at a cost of about R100 000 for every pump model, which, as a result, caused a delay in delivery of about two weeks every time,” says Wehmeyer.

He adds that, although Hazleton Pumps has brought the problem repeatedly to the attention of the SABS as well as the Department of Trade and Industry, nothing has been done about it yet.

Meanwhile, Hazleton Pumps prides itself on reacting to the requirements of local and international clients. These requirements – usually pump problems – and the solving of these problems results in the development of specific pump systems, explains Wehmeyer.