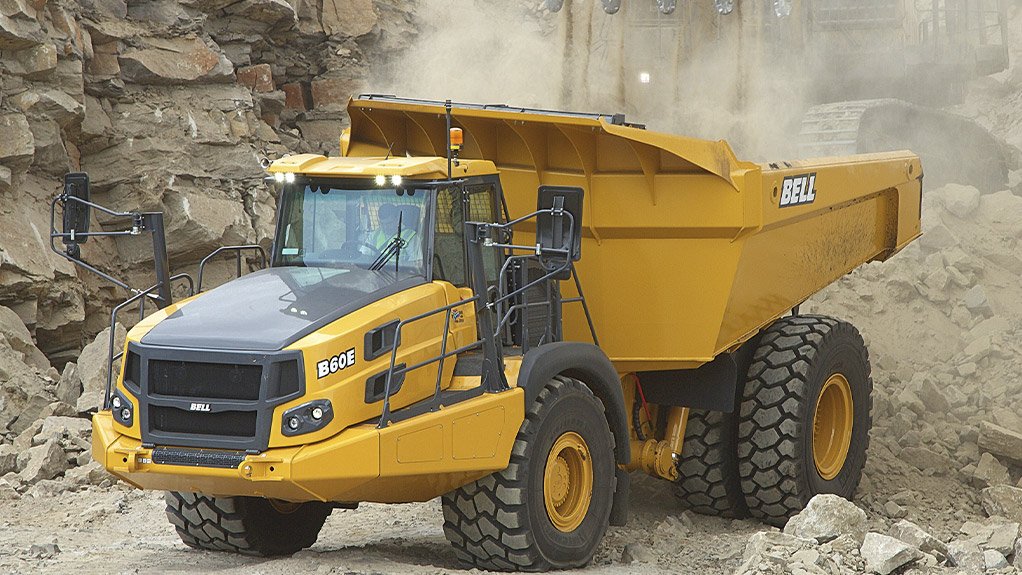 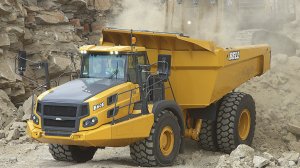 The Bell B45E 4 × 4 was introduced to the market in April and, like all Bell 4 × 4s, the trucks are produced in Bell Equipment’s main factory in Richards Bay, South Africa. The first machines are planned for delivery later this year.

Similar to the 60 t B60E and the smaller Bell B30E 4 × 4, the new truck is configured to provide a highly efficient and cost-effective transport solution for niche applications in the mining and construction industries.

With the front half of the truck being essentially the same as its 6 × 6 counterpart, the Bell B45E 4 × 4 is derived from high-volume technology and decades of experience.

Wet brakes on both axles ensure safe deceleration and work in conjunction with braking mechanism developer Jacobs’ engine brake to provide the multi-stage programamable automatic retardation. The standard Bell cab is spacious, offering increased visibility and comfort while ensuring safety and productivity. This is achieved through a comprehensive package of productivity, safety and ease-of-operation features, based on real-time data collection by the truck’s sensors, namely on-board weighing, and pitch or roll sensors.

In designing the rear chassis and the 25 m3 bin, the designers followed the design of the Bell 4 × 4 flagship, the B60E, which has been optimised for tough mining applications.

A rigidly mounted 55-t axle, supplied by German manufacturer Kessler, with 21.00R35 twin tyres, ensures a robust solution with a nominal payload of 41 t. At the front, the truck rolls on 775/65R29 tyres that boast high load carrying capacities and high lateral stability, an essential characteristic for a machine intended for challenging underfoot conditions. To improve ride comfort, the B45E 4 × 4 can optionally be equipped with the Bell ‘Comfort Ride’ adaptive front suspension system.

Like the Bell B60E, the B45E 4 × 4 bin concept is along the lines of a rigid dump truck rock bin with bottom-mounted telescopic tip cylinders. Owing to its wide geometry and flat-bottomed floor, the truck fits in well with typical quarry loading equipment and offers better filling characteristics than the longer 6 × 6 ADT bins of the same volume.

When carrying sticky material such as clay, optional body heating helps to minimise carry-back when tipping. Additionally, Bell Equipment has found that its 4 × 4 bin configuration, which does not have the traditional ADT dovetail, is considerably better at reducing carry-back than its 6 × 6 counterparts.

With a fully programmable maximum tipping angle of up to 55° relative to horizontal, the short bin body reaches a tipping height of only 6.4 m, which can be an advantage when operating with overhead structures.

“Thanks to its high capacity and superior productivity, the Bell B60E can perform a supporting or primary production role in many large opencast mining and quarrying operations around the world. However, we see other target applications for the B45E 4 × 4,” says Bell Equipment ADT product owner Tristan du Pisanie.

“These include small- to medium-sized mining or quarrying operations with lower production tonnage, as well as larger sites with difficult underfoot conditions. Finally, there could be operations requiring selective mining in very specific areas as a top-up on main production volumes.”

Despite a number of competitors having dropped 40 t rigid dump trucks from their range, many customers in Europe are continuing to work with rigid trucks in the 40-t class. “With comparable performance to rigid dump trucks on well-tended, dry underfoot conditions, the two-axle articulated trucks score in all-weather conditions when the haul roads deteriorate or become slippery,” says Du Pisanie.