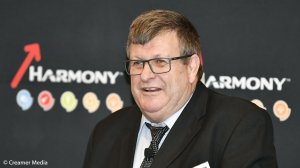 JOHANNESBURG (miningweekly.com) – Gold mining company Harmony expects to have a 30 MW solar power plant running in a year from now, provided all regulatory obstacles are removed. The company is also in discussion with Eskom to alleviate the impact of load-shedding.

Harmony CEO Peter Steenkamp said during a media conference covered by Mining Weekly that the 30 MW plant in the Free State would be the first step in the company’s move to arrange for its own electricity generation. (Also watch attached Creamer Media video.)

“We’re already far down the line as far as identifying the company that will build it for us and obviously our offtake agreements with them.

“We potentially in future can do another 40 MW, which is already designed. If we get the go-ahead very soon, by the end of the financial year we should be in a position to start building and in a year from now we’ll have a 30 MW plant up and running,” Steenkamp said.

In an interview with Mining Weekly a year ago, Harmony sustainable development executive Melanie Naidoo-Vermaak revealed that the company had gone out on procurement for the 30 MW solar plant, earmarked for Welkom.

Electricity represents 16% of Harmony’s total operational costs, which is why the company had placed so much emphasis on reducing electricity consumption, and now also on environmental protection.

The 30 MW was 10% of Harmony’s power requirements at the time. Since then, the company has acquired the Moab Khotsong underground gold mine from AngloGold Ashanti.

“Obviously, with Moab, it is bigger than 10% so we certainly would like to increase our self-sustainability as far as electricity is concerned,” Steenkamp clarified on Tuesday.

In response to Nedbank CIB market research analyst Arnold van Graan during question time after Harmony’s presentation of half-year results, Steenkamp added that he believed all regulatory hurdles would be scaled in a month or two from now to allow the company to commence the solar programme.

“We won’t build the solar plant with our own capital. It will be somebody else that will build it for us,” Steenkamp said.

From a cost perspective, solar presents a business case in competing with Eskom.

“Once construction is complete, solar will come in at below Eskom prices,” Naidoo-Vermaak said last year.

“If we have to cut back on production, we would do so at our high-cost mines, which are close to the end of their life, typically Masimong and Unisel. But we can also cut back on waste retreatment, which we can always leave to a later date.

“The continuous stage one and stage two load-shedding is not a good outcome for the mining industry if it means continuous cut back on production," he said.

"Our biggest consumption is on refrigeration, pumping and the delivery of compressed air to the mines and those you cannot just switch on and off. The refrigeration needs to be run all the time and the moment you switch it off, the mine heats up and you cannot mine.

"The things you can play with are really milling and hoisting, to do those cuts, and that is what we need to have on the way forward with Eskom, because every day if they say cut 10%, cut 10%, cut 10% we are going to run into trouble.

"You’ll remember our base is on our previous years of consumption and we haven’t closed any of the mines yet that we operate. We have to sit down and find a way forward with Eskom and we have some appointments with them to have that discussion," he told Mining Weekly.