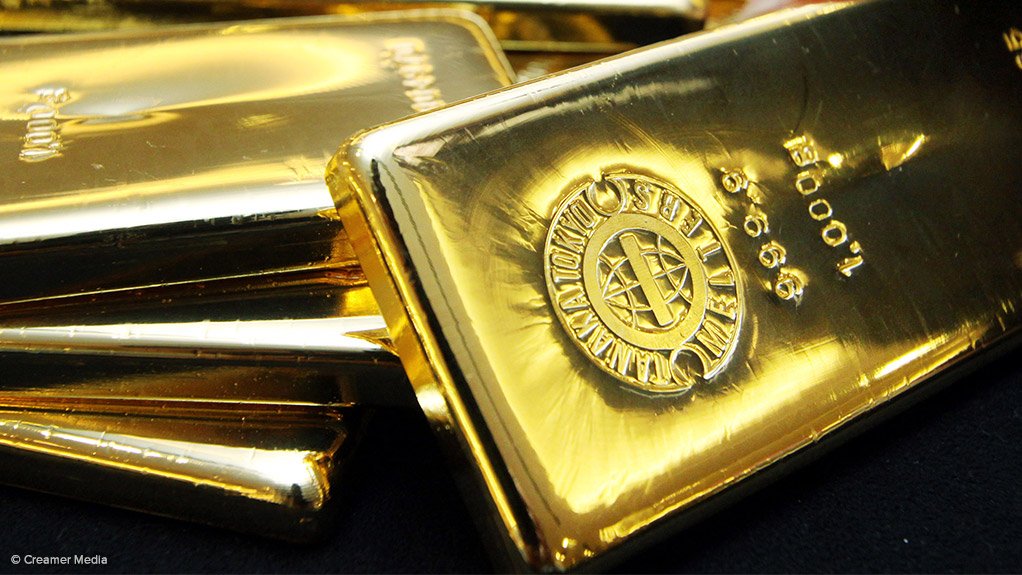 JOHANNESBURG (miningweekly.com) – Gold prices are expected to average $1 360/oz and hit a 2018 peak of more than $1 500/oz later this year, according to research firm Thomson Reuters GFMS, which published its fourth-quarter Gold Survey on Thursday.

The firm noted that the survey’s forecast discounts three federal fund rate hikes and that “a potential overheating from the effect of the new tax reform could lead to more aggressive tightening, limiting gold’s upside”.

Therefore, Thomson Reuters’ forecast for the yearly average remained unchanged from the previous quarter though the firm still extended its upside targets, as it expects increased price volatility this year.

Thomson Reuters also highlighted that the geopolitical climate and potential equity market problems would continue to support gold’s role as a risk hedge.

Following last quarter’s argument that there was a growing risk in equities, and despite strength persisting, the firm’s analysts still believe that “the markets need to brace themselves for a sharp correction once the feeding frenzy abates”.

Further, gold’s reputation as a risk hedge will remain supportive as rising tensions in Europe and a "somewhat spontaneous" approach from President Donald Trump are raising uncertainty levels, the survey stated.

In the physical markets, demand from India is set to remain at levels similar to those in 2017, while Chinese investment demand will likely pick up if gold’s price momentum is renewed going forward.

SURVEY HIGHLIGHTS
According to the survey, the highlights for gold in 2017 include the yellow metal gaining 12.5% intra-year in dollar terms, supported largely by geopolitical risk.

The survey further reveals that much of this was primarily a result of currency movements, with euro-denominated gold falling over the year and the rupee price rising by 6%, while the gain in renminbi terms (renminbi is a currency introduced by the Communist People's Republic of China) was just 2%.

Net central bank purchases, according to the survey, gained 36% year-on-year and, at 132 t, posted the highest quarterly result since the third quarter of 2015.

Gold slipped in early December to a five-month low ahead of the Federal Open Market Committee (FOMC) meeting, when the US Federal Reserve announced its intention to raise the federal funds target rate for the third time in the year.

This four-week move equated to an 8% rise in dollar prices, and only 3% in euro terms – although the moves in rupee and renminbi were 5% and 6% respectively.

This was propelled in part by the replenishment of metals trading market Comex’s long positions, which had been sold down ahead of the FOMC meeting, and covering of shorts similarly.

Exchange-traded fund holders, by contrast, were net sellers over the period, although they were holding in the latter part of January.

On balance, the prevailing circumstances point to a period of price consolidation with underwhelming demand in the physical market.

Thomson Reuters notes that, while physical buying “is enough to keep a floor under the price”, upside potential will, as usual, be driven by professional flows. The survey adds, the environment suggests that the future risk in the price lies to the upside.

A review of the fourth quarter of 2017 shows the physical market broadly in balance, with jewellery fabrication increasing “with its usual seasonal strength”.

However, if the exceptionally low offtake in 2016 is excluded, this would be the lowest fourth-quarter outcome since 2012.

Jewellery consumption, while 3% lower than consumption recorded in the fourth quarter of 2016, marginally exceeded fabrication levels.

Among the largest gold consumer, India’s jewellery demand increased by 8% in the final quarter, supported by a surge in sales during auspicious Dhanteras, the first day that marks the festival of Diwali in India, and lower prices later in the year which resulted in fresh restocking by jewellery fabricators.

Thomson Reuters noted, however, that this was a comparison against a very low base in 2016 and the fourth quarter offtake was down by about 12% against the same period in 2015.

According to Thomson Reuters. it appears that younger Chinese jewellery buyers are increasingly viewing gold as an adornment, rather than an investment, and consequently expects the volumes to remain under pressure.

While there is pent-up demand for investment bars, this will need stimulus from an improving price and resurgence in price expectations.

Elsewhere in the investment sector, US retail investment in coin and bars was down 55% year-on-year to 10.1 t. Coin fabrication declined by about 75% year-on-year and sales were the lowest in a decade, hindered in some part by the rise in enthusiasm for crypto currencies.

There has been growth in the secondary market, with discounts to newly fabricated products falling to as little as 50 basis points during the year.

Globally, retail investment in the quarter was 11% down from the fourth quarter of 2016, with a large number of countries posting losses.