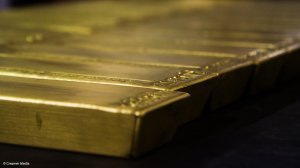 JOHANNESBURG (miningweekly.com) – Global gold demand fell to an eight-year low in the third quarter of this year, following a “softer quarter” of demand in the jewellery sector and significantly lower inflows into exchange-traded funds (ETFs), the latest data from the World Gold Council (WGC) shows.

The year-to-date gold demand decreased by 12%.

WGC member and market relations head John Mulligan told Mining Weekly Online during an embargoed interview that the third quarter proved to be somewhat challenging for gold demand, but that the drop had masked some underlying factors.

Global jewellery demand contracted by 3% to 479 t during the quarter under review, accounting for 17 t of the year-on-year decline, as the newly introduced 3% goods and services tax and tighter anti-money-laundering regulations around transactions in India deterred buyers.

After three consecutive quarters of growth, demand in India plunged 25% year-on-year to 114.9 t in the third quarter, while gold jewellery demand in mainland China recovered to 159.3 t, a 13% improvement year-on-year, after a consecutive run of ten contractionary quarters.

However, China’s recovery remains weak from a longer-term perspective, with demand 15% below the five-year quarterly average of 187.1 t.

While ETFs recorded positive inflows of 18.9 t, this was 87% lower than the unprecedented high of 144.3 t recorded in the third quarter of 2016.

“Investors continued to favour gold’s risk-hedging properties, but the greater focus was on buoyant stock markets,” the report commented.

In a statement released parallel to the report, WGC market intelligence head Alistair Hewitt pointed to “some real bright spots” during the quarter under review.

He pointed out that retail investment demand in China grew for the fourth consecutive quarter; the Turkish and Russian central banks added to gold reserves; and, after years of declines, an increase in the use of gold in technology emerged, supported by the demand for high-end electronics.

Demand from other sectors firmed during the third quarter, with central banks buying a “healthy” 111 t of gold, a 25% year-on-year rise.

However, taking into account that the third quarter of last year was the lowest level of bar and coin demand since the first quarter of 2009, the quarter under review was below its three-, five- and ten-year quarterly averages.

Demand in the technology sector increased by 2% to 84 t.

Meanwhile, total supply fell by 2% in the third quarter of this year to 1 146 t, while mine production fell 1% year-on-year.

Recycling activity continued to normalise with a 6% contraction to 335 t after jumping in 2016.