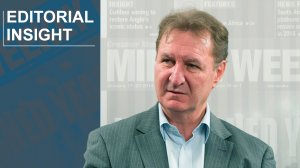 Often highlighted is that the world’s least developed countries should be allowed to burn coal because they do not have the money to access higher cost energy, climate change notwithstanding.

But it is certainly not only the developing countries that are using more coal; developed ones are doing so as well.

Take developed countries like Germany and Japan, for example.

This year, Germany added 4 000 MW of new coal-fired power to its electricity portfolio – its largest increase in coal-fired power in 20 years – and Japan brought on 3 600 MW following its decision to move away from nuclear, back into coal.

South Africa produces 255-million tons of coal a year, consumes three-quarters of it domestically and is building more than 10 000 MW of new coal-fired power generation with the Medupi and Kusile projects.

“As much as some may wish it, coal is not going away,” World Coal Association energy and climate committee chairperson Godfrey Gomwe told last month’s International Coal and Climate Summit.

Gomwe, who is also CEO of Anglo American Thermal Coal in South Africa, urged at the meeting, in Warsaw, venue of the nineteenth Conference of the Parties to the United Nations Framework Convention on Climate Change, that development banks help developing countries to use their coal in the cleanest possible way rather than starve them of funding.

“The major consumers of coal are continuing to consume coal. The Chinese and the Indians are big growers and there is increasing demand. Korea and various other countries are saying they have to industrialise and while they industrialise, they are going to burn coal.

“The Chinese and the Indians cannot industrialise and develop without coal-fired energy. They are not going to use any other form of energy,” Glasenberg said in response to questions put to him by Mining Weekly.

GlencoreXstrata already has a large coal resource base in South Africa and established infrastructure, which gives the company an edge in coal in South Africa.

For the right returns, the company is ready to invest in additional coal assets in South Africa.

Coal provides 40% of the world’s electricity and could well overtake oil as the largest source of primary energy in the world within the next few years.

Ignoring coal is no way to find a realistic solution for the many developing countries that have significant coal reserves and want to use those reserves to electrify their economies.