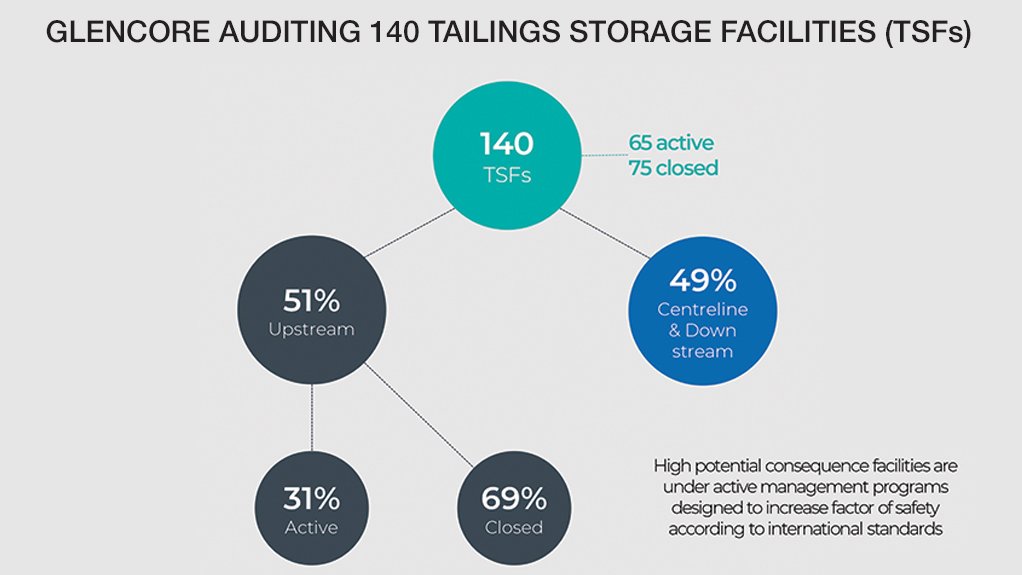 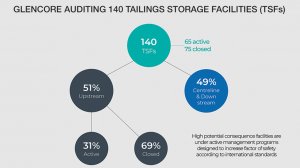 JOHANNESBURG (miningweekly.com) – Diversified mining and marketing company Glencore is auditing 140 slimes dams, 65 of them active and 75 of them closed.

The company has been undertaking detailed assessments and audits of all material tailings storage facilities (TSFs) over the past three years, after accumulating a TSF significant asset footprint through mergers and acquisitions and organic growth.

Glencore CEO Ivan Glasenberg made these revelations at a media briefing on Wednesday against the background of last month’s tragic loss of 170 people at Vale’s Córrego do Feijão iron-ore mine in Brazil, which has prompted renewed industry action to ensure that TSFs are not vulnerable to collapse.

“This is an issue for the mining industry and we support a TSF classification system and requirements for external review, with transparent disclosure to stakeholders and communities,” he told Mining Weekly Online.

Its own internal team to review all its tailings dams in 2014 and a year later, following the death of 19 people in the Vale-BHP Samarco incident in Brazil, independent consultant Klohn Crippen Berger (KCB) of the Canada, was commissioned to review all its dams continually.

Roles and responsibilities, change management processes, action tracking and documentation have been clearly defined, with all corrective actions being subject to verification.

“We’re relying on the technical experts and we have employed the best of the best, I understand, in tailings dams, and we’re working closely with them to give us the best expert advice about how we secure the tailings dams. I understand the big problem is on upstream dams and we’re working closely with the experts to ensure that those are secure,” he said.

New upstream dams have been banned in Brazil and the decommissioning of existing upstream versions has been ordered by August 15, 2021.

Glencore released a graph (see above) showing that more than half of its TSFs are upstream dams.

Glasenberg said that many industry discussions have been taking place under the auspices of the International Council on Mining and Metallurgy, which prompted quick industry action following the Córrego do Feijão slimes dam collapse.

Mining major BHP on Tuesday also backed the creation of an independent international body to oversee the construction, integrity and operations of tailings dams, which hold mining waste, after the second collapse of a slimes dam in Brazil in the past three years.

"As an industry, we now have to redouble our efforts to make sure events like this simply cannot happen," BHP CEO Andrew Mackenzie was quoted as saying.