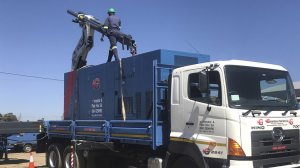 With load-shedding a reoccurring problem for mines and businesses in South Africa, standby power generation company Generator and Plant Hire South Africa (GPHSA) suggests that mines will still need to rent generators for a while, even with the introduction of the new electricity regulations.

GPHSA – which opened its doors as a family-run business in 1987 and is now the largest professionally run generator rental operator in South Africa – currently supplies most of the mines in the Northern Cape, as well as some mines in Botswana and Mozambique with bespoke backup energy services and solutions.

The company hires out diesel generators and power systems, such as transformers, sync panels and distribution boards with all of its products, in modular form, to be assembled and integrated with a mine’s power system within a couple of hours, says GPHSA MD Tony Sipho Sibanda.

Generators ranging from 500 kVA up to 4 MVA are deployed at mines as standby power and integrate seamless automatic mains failure switches (AMF panels) to provide uninterrupted power either during load-shedding, at random or if there is an issue with the power grid stability.

Diesel is the predominant source of energy for large-scale generators, “and it will take at least ten years before we see a complete switch to other sources such as solar, hydrogen and other natural gases. As society becomes more environmentally sensitive about the combustion of hydrocarbons for fuel, we are seeing a growing consciousness to use less diesel through hybrid systems that integrate renewable energy into power solutions”, he explains.

Unfortunately, batteries are not yet capable of storing enough energy to supply a large-scale operation exclusively, such as a mine, for longer than four hours, nor is it practical to try to power a mine’s operations using solar photovoltaic (PV) systems.

Sibanda says GPHSA’s current battery partners have products available with storage capacity of 20 MWh, but adds that physical size is still a challenge, as these batteries require enormous amounts of space to establish and configure.

PV systems also require vast open land for the panels to be set up. “Theoretically, 100 MW would require close to a 300 ha filled with panels,” he suggests.

However, there are new and evolving ways for mines to use generators sustainably, reducing the amount of diesel as well as carbon emissions.

Firstly, several establishments have used installed battery and PV systems for lighting and basic services, which draws relatively lower current to machinery. Sibanda illustrates that the generators and the grid are then used only for machinery requiring higher voltage and amperes. This quick solution saves up to 20% in energy costs, reduces grid dependency and burns less diesel, he comments.

Yet, the best and most viable solution to transform mine generators into ‘green machines’ is to use biodiesel, he tells Mining Weekly.

The current limitation to realising such a solution is the lack of availability of the quantities of biodiesel required to make a meaningful impact on the clean energy quest. Biodiesel options currently cost more than petroleum products. “Our business, in a normal month, uses up to one-million litres of diesel and I estimate that this is one-fifth of fuel used nationally on backup generators. If we could source biofuel at the right price and quantities, that would be a great opportunity to progress.”

Sibanda enthuses that GPHSA is pleased with the President’s announcement to increase the embedded generation licence-exemption threshold, as South Africans have a collective interest in seeing State-owned power utility Eskom restored to stability.

He stresses that generators still have a role to play in the long-term economy because while South Africa is addressing the energy generation issue using new regulations, there are still challenges in distribution and transmission.

“Issues related to cable theft and infrastructure vandalism cause daily disruption to our systems and we still have transmission infrastructure that’s over 40 years old operating in the field, and it will take generations to upgrade and replace it.”

GPHSA is working with several bidders in the wind and solar farm industry to support their construction sites over the next two years as they establish new plants in response to the new announcement allowing for the self-generation of electricity of up to 100 MW.

“Certainly, this will create jobs and opportunities at this much-needed time,” Sibanda concludes.