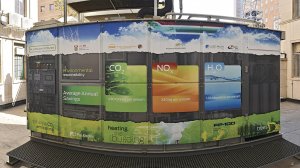 Minerals Council administrative head Jeannette Hofsajer-Van Wyk tells Mining Weekly that, aside from being the first 100 kW low-pressure natural gas baseload commercial cogeneration fuel cell in South Africa, it is also the only fuel cell of its kind on the continent.

“This is disappointing as we would have hoped that the market would have seen the benefits of fuel cell technology and that its adoption would have been better. There are, however, signs that this market is starting to see growth,” says Hofsajer-Van Wyk.

The Minerals Council fuel cell has been registered under the United Nations Framework Convention on Climate Change Programme of Activities 9437: Cogeneration at Commercial sites. It is hoped that this will allow the Minerals Council to generate carbon credits in future.

“We pay less for electricity, and the fuel cell is not only more reliable than current providers but also effective in reducing our carbon footprint,” Hofsajer-Van Wyk explains.

The fuel cell, manufactured by motor and generator company Fuji Electric, is rated at 100 kW, but runs at a baseload of 80 kW, which is augmented by the City Power grid when the load required to run the building exceeds the output of 80 kW.

Hofsajer-Van Wyk points out that, as the fuel cell is a baseload system there are peaks in demand necessitating the splicing of the fuel cell generated power with the grid.

She explains that the splice is completely unnoticeable – unless there is an actual power outage. In this instance, the fuel cell will shut down and then restart in emergency mode, thereby ensuring power supply to those areas that require it.

Minimal maintenance is required to keep the fuel cell operating within optimal parameters as the fuel cell makes use of an electrochemical process rather than combustion and its natural gas fuel source is readily available through the gas company Egoli Gas infrastructure.

The greatest challenges in terms of using fuel cells are the dust and altitude, says Hofsajer-Van Wyk. The filters on the fuel cell need regular maintenance, which is conducted by business development service provider PentaQuarkEnergy technical head Nicola Kotze.

Hofsajer-Van Wyk points out that minimal additional infrastructure was required when installing the fuel cell – a major contributing factor to its being selected as an alternative power source for the building, formerly known as the Chamber of Mines building, situated in Marshalltown, Johannesburg.

“All we needed was a two-metre link to the Egoli Gas network, a locally manufactured and installed desulphurisation plant, and an electrical distribution system, which enables the fuel cell to merge with the grid.”

The Minerals Council’s fuel cell enables the building to be less reliant on the grid and also uses repurposed by-products, such as heat, to contribute to the building’s ambient temperature in winter.

On some fuel cell types, water is manufactured through the process of electrolysis, as well as heat, which can be redirected into a building. There are also varying amounts of carbon dioxide (CO2) produced, depending on the fuel cell and its electrolysis process.

The CO2 generated by a fuel cell is of a consumable grade, which can then be used in carbonated beverages, in greenhouse applications where CO2 is used to enhance plant growth, and as a fire inertisation system in data centres.

Not only is fuel cell technology cheaper, more reliable and easier to maintain, with the added benefit of cogeneration, but uptake in the use of fuel cells would result in an increased demand for platinum which would preserve employment