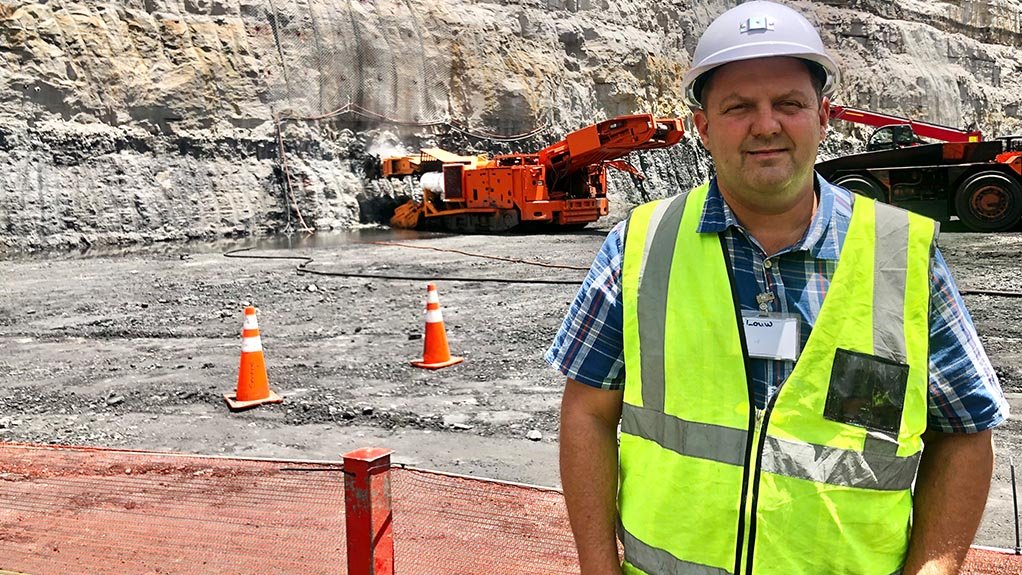 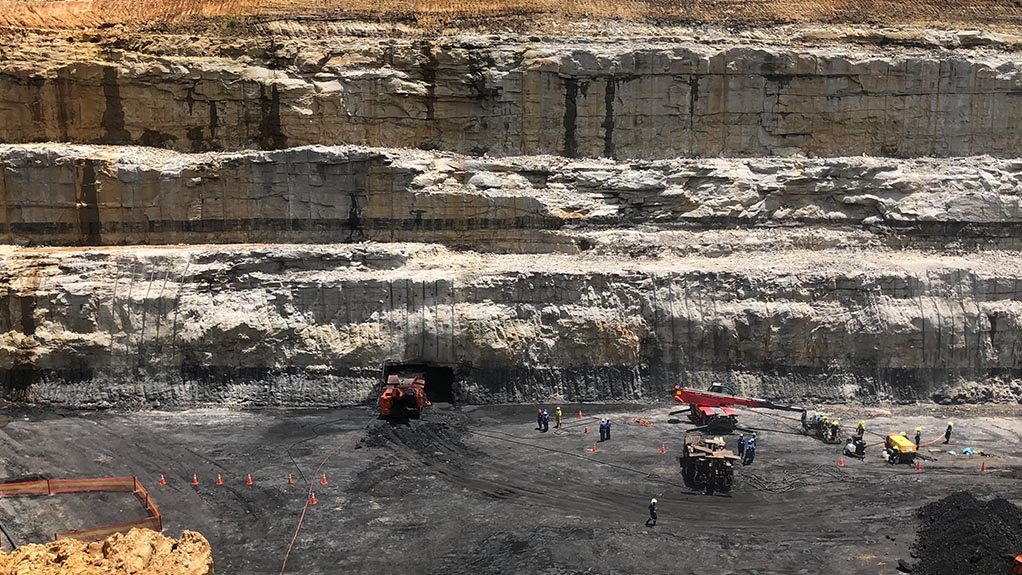 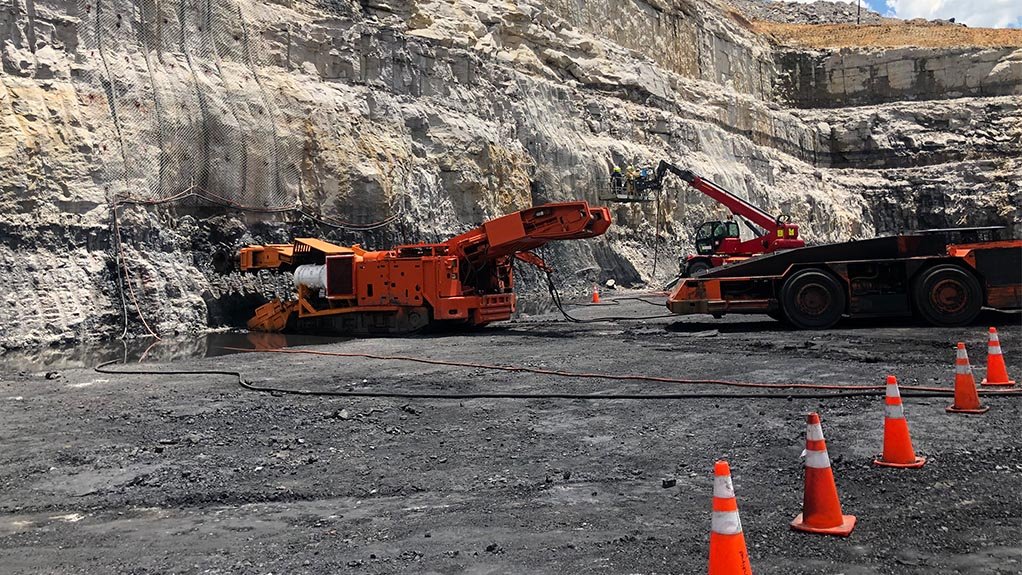 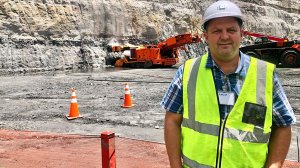 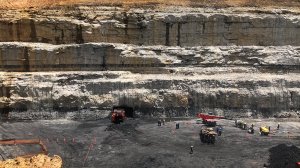 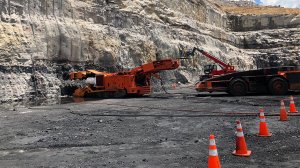 The new adit, which was previously known as Twyfelhoek, was renamed Udumo – which means “honour” in isiZulu – to better reflect the spirit and culture of the surrounding Saul Mkhizeville community in Mpumalanga.

Construction of the new adit started on April 6 last year and was completed in January.

The new adit forms part of the Kusipongo coal resource located to the west of the previously developed and ongoing Kangra mining operations. The Kusipongo mine has a coal reserve of about 41.9-million tons and could extend the life-of-mine (LoM) by more than 20 years.

Kangra’s reserves on its Maquasa mining right consisting of East, West, Block H and Block C operations, which have been in operation since 1996, will be depleted in the foreseeable future.

Louw told Mining Weekly that when H Block is depleted  the equipment used in the H Block underground mine would be moved to Udumo to mine the Kusipongo reserves.

The Pit C opencast mine will carry on mining Phase 1 until the reserves are depleted towards the fourth quarter of this year.

Phase 2 of Pit C, should it become available to mine during this period, will extend the life of the pit up to the end of 2023.

Kangra’s next development of the Kusipongo reserves is the planned Balgarthan A adit, which will have one underground section.

The updated capital budget estimated for Balgarthan A is R112.6-million.

The Balgarthan A adit will be located about 25 km south-west of the Udomo adit. Louw said the company was targeting the third quarter for the start of construction on the new adit.

The Kangra mining operation, which was put on care and maintenance in 2020 following the outbreak of Covid-19, employs 549 people, including contractors. The mine restarted operations in March last year, with Louw noting that it was a relief to all Kangra employees to have the LoM extended.

“This was one of the most testing periods in the mine’s 64-year history,” he commented.

Udumo comprises of an adit where access will be gained to the rest of the reserves for underground mining. A capital budget of R153.6-million was assigned for the establishment of Udumo.

The access road to the adit was completed on September 13 last year and the power lines and the water reticulation connections were completed by mid-December. With a mixture of both low- and high-volatility coal, the Kusipongo reserve will be mined from three sections using a bord-and-pillar method.

Kangra is targeting a production rate of 1.44-million tons a year run-of-mine (RoM) from the underground mining sections once Belgarthan A adit is commissioned and 360 000 t/y RoM from the available opencast areas for the duration of the LoM.

For the underground sections, Kangra has collaborated with Komatsu Mining and Sandvik Mining to continuously view and implement real time systems to monitor operational and safety performance of the equipment.

Once mined from the various adits, the coal will be either trucked or conveyed by overland conveyor to the Maquasa East shaft. From there, it will be washed and trucked to the Panbult Rail Siding about 30 km from the mine.

It will then be railed to the Richards Bay Coal Terminal (RBCT), in KwaZulu-Natal, with the bulk to be sold to multiple export clients. Some of the coal is reserved for local metallurgical applications.

Kangra’s coal can be washed to produce a range of thermal coal products for both international and domestic customers. The majority of Kangra’s coal is exported through the RBCT for power producers. Kangra holds an interest in RBCT, which allows it to export over 1.6-million tons a year of coal.

Kangra has three washing plants on site – one 350 t/h plant and two 250 t/h plants. Louw explained that only one of the plants is operating currently at 200 t/h. He said the company was considering adding a filter press to increase plant feed.

In addition to the new underground development, Kangra started mining the Block C opencast section, which will be ramped up to about 40 000 t/m of RoM coal now that the Udumo adit is established.

Louw explained that the production ramp-up was delayed slightly by heavy rains in December and January. However, the excavators used to open Udumo up were being moved into Pit C to assist in the ramp up.

“The extension of the LoM of Kangra is critical for local communities that derive employment and business opportunities from the mine.

“The last couple of years have been challenging for our staff and community, particularly when the mine was placed under care and maintenance owing to the onset of the Covid-19 pandemic and the ensuing collapse of the coal price. Many of our employees have been uncertain about their jobs,” Louw said.

“Our Kangra teams have worked hard to ensure that we save jobs while expanding the operation in a sustainable manner. It has not been easy, but we wish to express our appreciation of regulators who have acknowledged mining’s contribution to the economy of our country.

“We would like to continue working with all regulatory authorities to expand Kangra operations and create new jobs,” Menar MD Vuslat Bayoglu added.