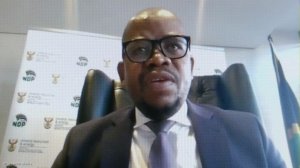 JOHANNESBURG (miningweekly.com) – A comprehensive exploration strategy will be developed in the next three months and engagement on the potential of the platinum group metals- (PGMs-) linked hydrogen economy is taking place, Department of Mineral Resources and Energy (DMRE) director-general Advocate Thabo Mokoena said on Thursday.

In a keynote address on day-two of the virtual Joburg Indaba event, Mokoena said South Africa needed to increase its share of global exploration expenditure to at least 3% and at question time, he confirmed that the opportunities presented by the hydrogen economy are under scrutiny. (Also watch attached Creamer Media video.)

During day-one of the Joburg Indaba, Minerals Council South Africa CEO Roger Baxter referred to the target of securing 3% of the $10-billion a year spent globally on exploration and supported the introduction of the flow-through share scheme as one part of a full suite of measures tailored for a comprehensive exploration strategy for South Africa.

In response to Mining Weekly on hydrogen, Mokoena said that the department had initiatives looking into the opportunities that the hydrogen economy presented, in line with South Africa’s large PGMs endowment.

“It’s work we’re currently doing with the Minerals Council. We have identified seven key priorities after being given a directive by the Minister. We need to come up with a clear policy on hydrogen because we can really do better in supporting our industry. The discussions are ongoing. We still have engagements with the PGM CEOs where they raise the hydrogen opportunities that can be tapped into,” Mokoena said.

In a note to the 300 virtual attendees Baxter added: “There’s a hydrogen roadmap process under way, led by government and including industry.”

Mokoena said in response to Mining Weekly that the DMRE was, at this stage, not part of the regional project to identify green hydrogen sweet spots across the Southern African Development Community (SADC) region ahead of the projected opening up of a likely multitrillion-dollar export market going into the future. “We haven’t as yet tucked into this but it’s an area that we’re also looking into. We do have the international coordination complement within the department. We had plans when we started earlier this year, but unfortunately we were disrupted by Covid-19 . . . and this is something we’ll be looking at as the department.”

As has been reported, Southern African Science Service Centre for Climate Change and Adaptive Land Management (Sasscal) is committed to the successful implementation of this project of identifying green hydrogen sweet spots in 11 SADC countries.

“We’re moving really fast,” Sasscal executive director Dr Jane Olwoch commented to Engineering News & Mining Weekly in a Zoom interview last month, in which she described the green hydrogen atlas project as the starting point of a process to firm up data and validate green hydrogen potential. This is expected to be followed by the building of a pilot plant that is able to demonstrate the competitiveness of Southern African green hydrogen generation ahead of commercialisation.

On exploration, Mokoena told the Indaba that part of the DMRE’s comprehensive strategy would be:

“Beyond this, we’ll finalise work with the development finance institutions and the private sector in the development of a comprehensive programme to support junior miners and ensure that prospecting rights are actively converted into mining operations and shared value,” Mokoena added.

Questioned by Joburg Indaba chairperson Bernard Swanepoel on whether improving the DMRE’s currently inadequate cadastre system would form part of the comprehensive exploration strategy, Mokoena said: “On the cadastre, we have been getting some comments. I can confirm here that two weeks ago, we had a meeting with the Minister to discuss the cadastre and different ways and means in which we can deal with this matter.”

PwC’s SA Mine report released this week stated that there is a need to improve the DMRE’s Samrad mineral cadastre system.

“We’re aware that it causes a bit of a challenge as the comments have made clear. Its something we’re working very hard on . . . and I can confirm that on the side of the administration . . . that you can’t be talking about attracting international investors whilst you still have this kind of a challenge. So, it’s a matter that we are really giving the highest level of attention that it deserves,” Mokoena said.

"With the progress on the new exploration strategy, I think that work is well under way and the commitment we’ve made, we’ll be able to honour, because the Minister is pushing very aggressively on this one."

The economic transformation committee (ETC) of the African National Congress (ANC) said in its 30-page discussion document earlier this year that mining exploration should be incentivised, as is the case in other mining jurisdictions, and that mining companies should be encouraged to list on the Johannesburg Stock Exchange (JSE)

The ANC’s ETC document, which received positive reaction, puts forward an economic framework for reconstruction, growth and transformation, with the objective of building a new, inclusive South African economy, at a time when the Covid-19 pandemic is continuing to impact negatively on economic activity.

The Minerals Council has acknowledged the ANC’s stance and positively noted the approaches proposed to reinvigorate the county’s mining industry.

The document acknowledged the falling levels of investment in exploration and the job losses the industry had suffered in recent years. A consequence of the dearth of exploration spending was that fewer new jobs were created to replace those lost. Despite this, the council noted that the ANC document reaffirmed that South Africa remained “a global mining powerhouse”.