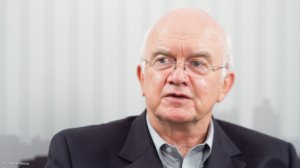 Bristow, speaking to Mining Weekly Online in the attached video interview, said the discovery of what appears to be a kimberlite pipe had been made by South African-born geologist Steve Haggerty, CEO and chief exploration officer of Youssef Diamond Mining Company (YDMC).

The pipe is located in Liberia’s Camp Alpha region of Cape Mount County.

The US-funded YDMC has been working in deep jungle in a cratonic area regarded as highly prospective and is now taking steps to scope and develop a plant for the conducting of the pipe’s economic evaluation.

“It’s nice to see some new discoveries coming to the fore,” said Bristow.

If the pipe turns out to be economic, it has the potential to boost Liberia’s developing economy.

However, only 1% of the 6 500 kimberlites that companies have found around the world have been economically feasible to mine.

The pipe, along with an associated kimberlite fissure system, is almost certain be the source of the diamonds that have supported a downstream alluvial artisanal diamond mining community for the past seven decades.

In neighbouring Sierra Leone, the Steinmetz group has the Koidu diamond mine.

YDMC said in a media release that the pipe had a proven length of 438 m and a width of up to 45 m.

The Star of Sierra Leone, which was discovered in the Koidu area in 1972, is said to be the largest alluvial diamond ever discovered.

The 968.9-carat diamond, which New York City jeweller Harry Winston reportedly bought for around $2.5-million 41 years ago, is described as having perfect chemical purity.