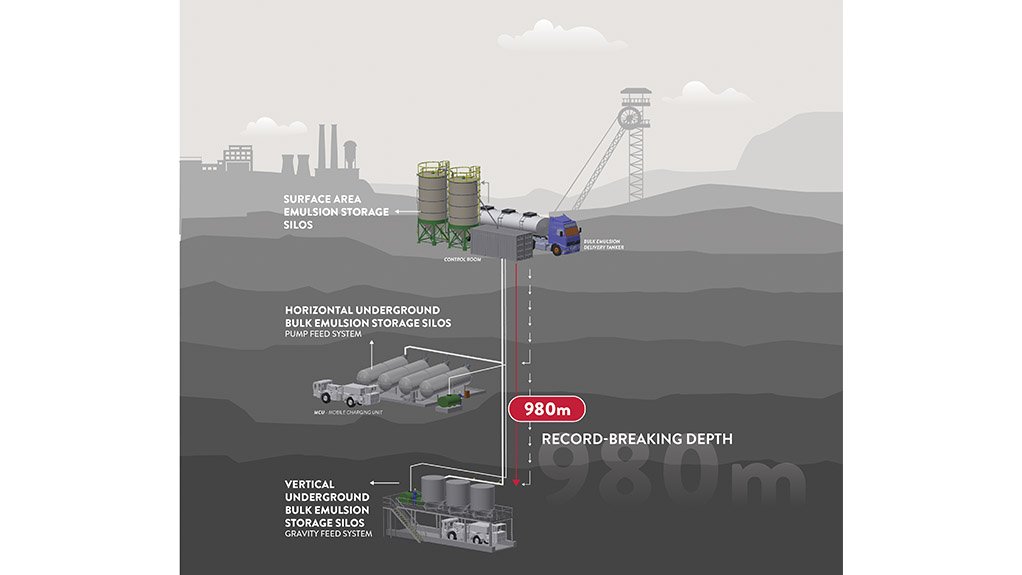 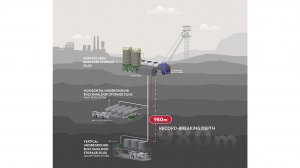 TAILOR-MADE DELIVERY SYSTEM This integrated EVDS delivers the base emulsion and sensitiser required directly to a storage facility underground.

Both the emulsion and sensitiser were delivered at depths of up to 980 m.

NFCA is one of the largest underground mines in Zambia’s Copperbelt province. The mine was initially called Chambishi Copper Mines under the management of miner Zambia Consolidated Copper Mines. Multinational company China Nonferrous Metal Company (CNMC) took over later, in 1998, while the mine was under care and maintenance.

The SEOB is a massive project which has attracted capital investment of about $830-million. NFCA and equipment supplier Sandvik Mining and Construction entered into a partnership to develop a highly automated and digitalised mine in Africa. At the SEOB, the latest intelligent Sandvik equipment with new technology is being used. This investment is for equipment, infrastructure and other costs involving mining.

A new shaft was recently introduced at the Chambishi mine, which included several “leading-edge” technologies, such as AutoMine@Lite, AutoMine@fleet, OptiMine and Fuel vertical drop. These are aimed at developing the most cost-effective mining operation.

the sticky UG200S product ideal for up hole charging – and wished to continue reaping the benefits of this emulsion. The mine requested that both emulsion and sensitiser products be delivered to its 680 m and 980 m mining levels.

AECI analysed the space available, product demand, and blasting schedule of the client to provide an optimal surface and underground storage capacity, as well as a tailor-made delivery system.

Various installation options were considered to meet the mine’s requirements and to ensure that the system could be operated safely and sustainably.

AECI regional manager Michael Woolridge explains that the agreed scope was a joint venture in which AECI supplied all fabricated plant and equipment, as well as engineering and project management expertise to manage the installation and commissioning of the project. NFCA was responsible for all installation work on site.

The process design and product testing were managed by a team of AECI specialists and construction engineering company ELB Engineering, the technology partner for the EVDS. The local AECI Zambia team paved the way for a successful installation and was instrumental in the outcome of the project.

“The installation was finalised at the end of January 2020, on time and within budget. The project scope included the supply and delivery of all plant and equipment, the preparation of the site, drilling of the borehole, blasting of the underground cavities, as well as installation and commissioning.”

On February 5, 2020, the first emulsion was dropped to the 680 m level, followed by a drop to 980 m the following day. The system was immediately available at full capacity and continues to operate as such.

Before the EVDS was installed, the mine used 4 t emulsion cassettes that were reloaded on the surface and transported through the cage network to each level. This methodology was costly, compromised the quality of the product and was time consuming, says Woolridge. Delays caused by double handling, cage times and spillages at decanting points were also commonplace.

The critical consideration for the mine in opting for AECI Mining Explosives’ EVDS was to free up cage time to enable the mine to increase hoisting capacity.

The key benefits the client has realised include improved safety; seamless inventory control; reduced interface with explosives; reduced maintenance, fuel and asset wear as well as reduced risk of theft.