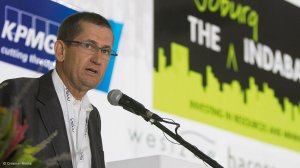 JOHANNESBURG (miningweekly.com) – Mining’s problematic empty pipeline, which should be a major worry to both the mining industry and governments, is expected to be a hotly debated topic at the upcoming Junior Indaba in Johannesburg.

Chairperson Bernard Swanepoel said on Monday that the Junior Indaba’s recently launched programme would not be for the faint-hearted and would take place at a time when the mining industry was facing regulatory uncertainty, lack of security of tenure and a drying up of conventional sources of funding.

The former Harmony Gold CEO, who built the now international gold company from a moribund lease-bound single entity in the Free State to a multi-mine gold major with an infinite horizon, outlined how the unexplored regions of Africa were awaiting the attention of junior miners, who would also need to seek out the most competitive jurisdictions.

The South African mining luminary and thought leader stated in a release to Creamer Media’s Mining Weekly Online that the turnaround of mines for growth would feature strongly at the 2016 Junior Indaba at the Johannesburg Country Club in Auckland Park on June 1 and 2.

Open and earnest discussion could be expected from participants like Neal Froneman, Rob Still, Johan Dippenaar, Andy Clay and Richard Linnell and progress by African governments would be dealt with by a panel featuring Chamber of Mines of Zambia CEO Maureen Dlamini.

DRD Gold CEO Neil Pretorius would showcase how juniors could make money in the current environment and a panel made up of Paul Miller, Chris Hart, Mike Teke and Peter Major would deal with industry misconceptions.