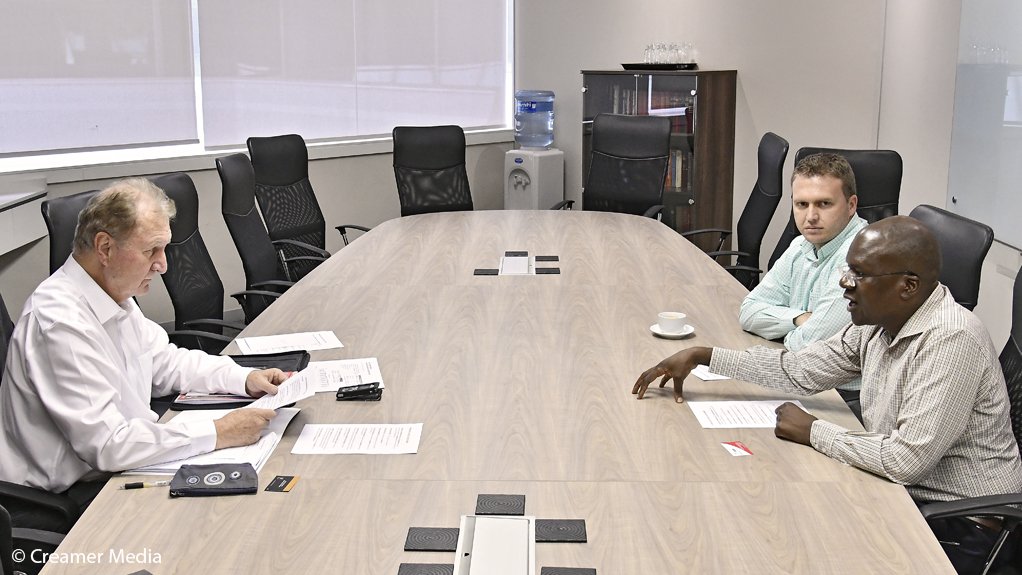 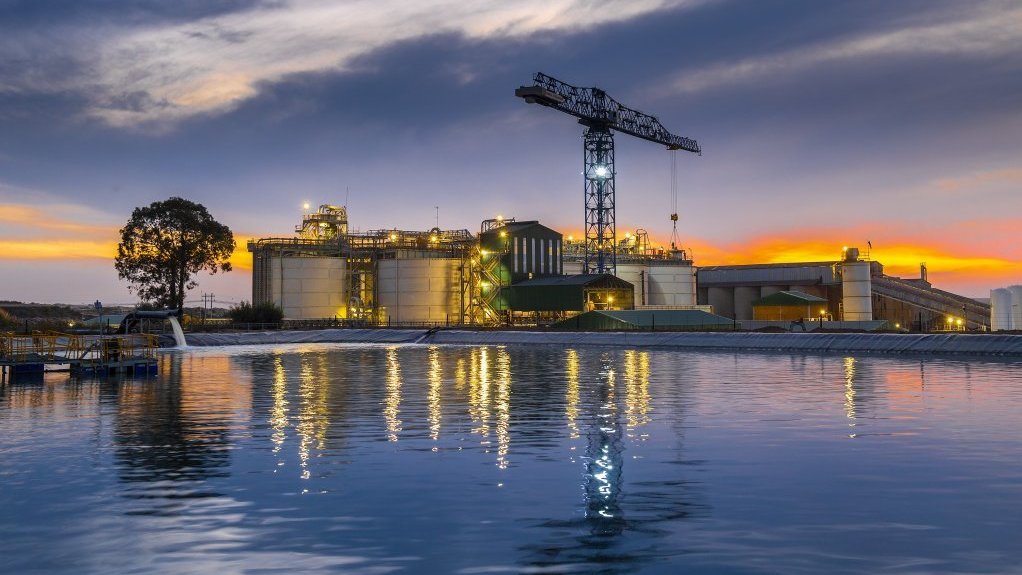 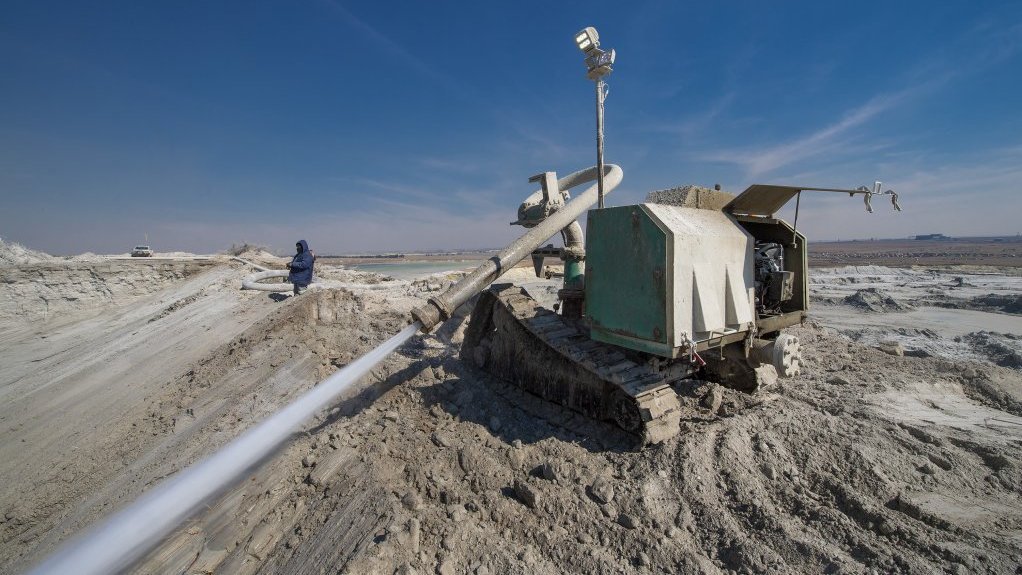 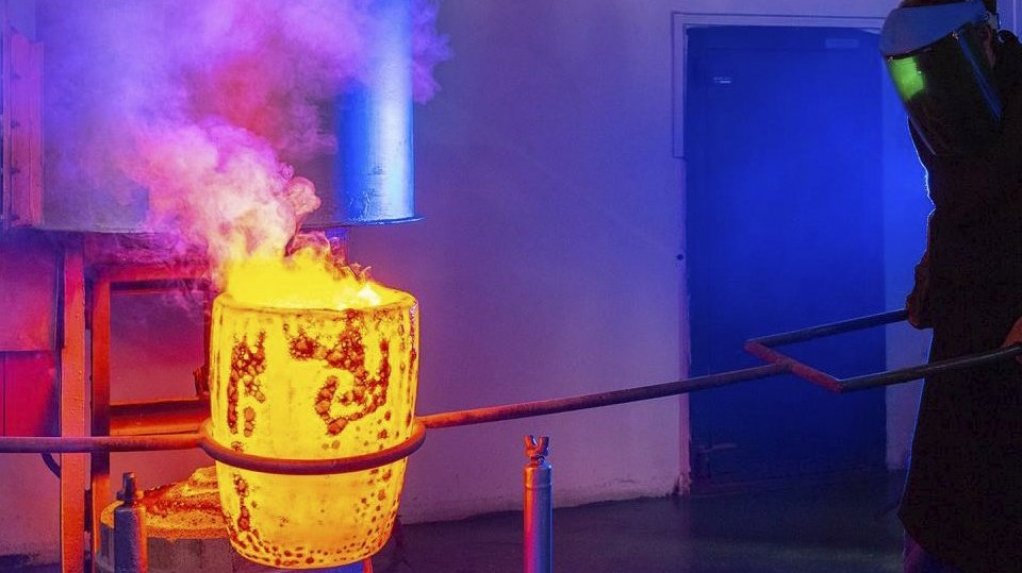 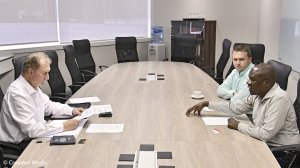 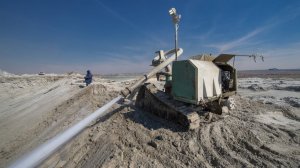 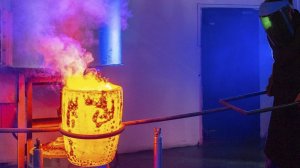 Photo by Creamer Media's Dylan Slater
Operations manager Oriel Shikwambana and group mining engineer Bert van den Berg (right) being interviewed by Mining Weekly’s Martin Creamer
This process water dam stores 15 000 m3 of water, enough to keep the operation going for eight hours. All water used for hydraulic reclamation is supplied through this dam, which is lined with high density polyethylene to prevent seepage.
Recycled water is fed at a rate of 162 ∙/s through a high-pressure pipeline, with a steel reinforced rubber hose making up the last 18 m to this R1-million-plus hydraulic reclamation unit.
The plant has electrowinning cells, where gold in solution is plated on to steel wool cathodes. These gold loaded steel wool cathodes are calcined in the calciner oven at 750 ºC to oxidise the steel wool and base metals impurities.

If ever a project exemplified South Africa’s project panache, it is the gold-from-tailings project, Elikhulu, which means ‘The Big One’ in Zulu.

This ‘Big One’, which is the fourth and largest tailings endeavour of the London- and Johannesburg-listed Pan African Resources, attained the objective many desire . . . it bettered its bankable feasibility study (BFS) metrics.

Elikhulu had its naysayers, but Pan African’s firm belief in its efficacy turned the naysayers into yaysayers – and the stakeholder applause could well intensify going forward.

This is because Elikhulu’s forecast performance for the full 2020 financial year is set to contribute to Pan African affirming itself as South Africa’s lowest-cost gold producer.

Its average gold recovery rate is currently far closer to 50% than the 48.7% banked, with 44% the pre-Elikhulu recovery level.

With a 1.7-million-ounce resource, Elikhulu has a 13-year life-of-mine and its cash costs in the 12 months to June 30 this year were a wonderfully low $555/oz.

It has access to 178.7-million tonnes of tailings that have accumulated over Evander’s seventy-year gold mining history and it is playing a positive environmental role by catalysing the removal from dump sites of legacy mine waste and freeing the land beneath the waste for new development.

The Evander tailings storage facilities (TSFs) being reclaimed are the Kinross, Leslie-Bracken and Winkelhaak TSFs, in that order. Once processed, these TSFs will be consolidated into one, shrinking Evander Mines’ environmental footprint substantially. The average gold content of the material being processed is 0.3 g/t, ranging from 0.28 g/t to 0.33 g/t.

The assembly of an established and experienced team has been a huge contributing factor in Elikhulu’s success.

Operations manager Oriel Shikwambana, group mining engineer Bert van den Berg, who provided the information for this report, group metallurgist Jonathan Irons and engineering manager Richard Kunnemann were intensively involved with the project, from the feasibility to the project construction and commissioning stages – and they are still there, overseeing the operational phase.

DRA Global was mandated to design the plant and managed the project’s construction in terms of a fixed price engineering procurement and construction contract. At the peak of Elikhulu’s construction, there were 1 400 people on site.

“We were there every day. We micro-managed to an extent, and we pushed very hard,” Van den Berg commented to the Mining Weekly team.

Payback on Elikhulu is forecast to be well ahead of the four-year period stated in the BFS. Elikhulu’s operating margin is 56% and net profit margin between 28% and 30%.

“You’ll have to go very far to find a lower-cost, safer and greener project than Elikhulu. Everything stacks up. It’s doing what we said it would do, and more,” Van den Berg enthused.

Other projects are constantly being sought, but the team is experiencing difficulty finding something that measures up to Elikhulu.

Factors contributing to Elikhulu’s low operating cost include the economies of scale brought about by the high throughput of 1.2-million tonnes of material a month; the absence of regrind mills and thickeners; the short pumping distances; low reagent consumption; and ownership of the water used.

Elikhulu requires 8 MW to 9 MW of electricity, which is supplied by State-owned power utility Eskom. It is not affected by load-shedding as the operation uses the same electricity infrastructure that is used by the Evander 8 Shaft underground operation and its associated metallurgical plant.

“We do make strategic decisions regarding load-shedding, to shed the load elsewhere and keep Elikhulu operating. We have the opportunity on the Kinross side to stop our mills because we don’t need to run them 24/7. You can catch up, whereas at Elikhulu, you can’t catch up, so we’d rather shed some load there and have Elikhulu run.

“Plus, we have an agreement with Eskom that the deep-level mines are the last to be switched off. But we do what we can. “When they say there’s going to be load-shedding, we look at switching off some of the fans or some of the mills and the big energy users,” Shikwambana outlined to the Mining Weekly team.

The R1.74-billion capital expended on the Elikhulu project comprised debt of R1-billion from a consortium of South African banks led by Rand Merchant Bank, and equity capital was raised through a successful rights issue. The accelerated bookbuild for the rights issue was conducted in the UK by Numis Securities, Hannam & Partners and Peel Hunt, and in South Africa by Standard Bank and Rand Merchant Bank.

‘The Big One’ is set to contribute close to 77% of the gold generated by Pan African’s tailings business by producing 65 000 oz of the 85 000 oz surface-sourced ounces guided for the 12 months to end June 2020.

Elikhulu’s operating cost is about R600-millon a year, with no major changes expected.

Construction of Elikhulu began in August 2018 and dividends were suspended in 2018 to accommodate Elikhulu’s construction year, but the benefits being contributed by the project have been overwhelming – and the dividends are back.

Although there is currently no prospect of a gold-price downturn – on the contrary, gold mining is being buoyed by a superb R700 000/kg gold-price bonanza – Elikhulu is playing a role in rendering Pan African somewhat cycle-proof.

For the first time, Pan African produced nearly 40% of its gold from tailings, with fewer than 500 employees.

Local procurement for the construction of Elikhulu was an overwhelming 98% with only 2% of the capital expended leaving the country to procure specialised equipment.

The first key element that makes tailings retreatment possible at Elikhulu is its access to TSF feed material. The Kinross TSF is less than 1 km away, the Leslie TSF 5 km away and the Winkelhaak TSF 6 km away. Feed material in slurry form is currently pumped along a pipeline from the Kinross TSF to the plant. The gold concentrate produced is smelted and formed into gold bars that have a 60% to 70% gold purity. These bars are bought by Rand Refinery, which collects them from Evander and flies them to the refinery in Germiston. The material that is redeposited on the reformed TSF after processing has an average grade of 0.15 g/t

The water is used to hose the TSFs and as gland service water for the slurry pumps.

The land beneath the Leslie-Bracken and Winkelhaak TSFs will become available for development and discussions are under way with the local Govan Mbeki municipality on possibly using the land for the development of an industrial park.

A feature of the plant, to which feed material is supplied by hydraulic mining contractor Fraser Alexander, is its stand-out pre-oxidation process. The complex high-shear agitator on the pre-oxidation tank, which was supplied by Outotec, of Finland, accelerates the mass transfer of oxygen from the gaseous phase into the liquid phase and enables the gold dissolution reaction to occur at a considerably higher rate, compared with the rate achieved by conventional continuous tanks.

The absence of thickeners is another unconventional aspect of the Elikhulu plant. The need for thickeners is negated by the provision of the feed material at the required density through the washer sizes and technology of the high-pressure water and hydraulic reclamation units used.

Gold output is calculated to be consistent for 13 years because where the grades are slightly lower in one TSF, the recoveries are slightly higher, and vice versa.

The main processes, such as carbon-in-leach (CIL) technology, acid-wash elution and electrowinning, are conventional.

CIL is the preferred process deployed because of its ability to mitigate the ‘preg-robbing’ nature of the feed material. Carbon has a high affinity for gold and the carbon in the CIL process absorbs the gold, which is then recovered more easily during the subsequent elution process than would be the case if it remained in solution. The imported carbon is extracted from coconut shells, which have a 40% carbon content.

Elikhulu is modelled on the Evander Tailings Treatment Plant, which operated as a 200 000 t/m pilot plant until January this year, when it was incorporated into Elikhulu.

One barely sees a person in the plant, and contracted personnel on the TSFs are equipped with remotely controlled hydraulic reclamation units.

The target at Elikhulu is to have zero lost time injuries. In the plant, cyanide safety is being taken extremely seriously, with every effort made to eliminate perilous risk that the use of cyanide can pose.

A feasibility study into the generation of 10 MVA of on-site solar power at Elikhulu has reached an advanced stage.

The company has identified electricity supply from Eskom as one of its biggest risks, in terms of cost escalation and stability of supply.

The initial study involves operating a solar plant during the day to avoid Eskom’s peak rates and in the longer term, consideration will be given to going off grid completely.

More solar power will be considered for future projects, including the Egoli underground project at Evander, which is now the subject of intense study.