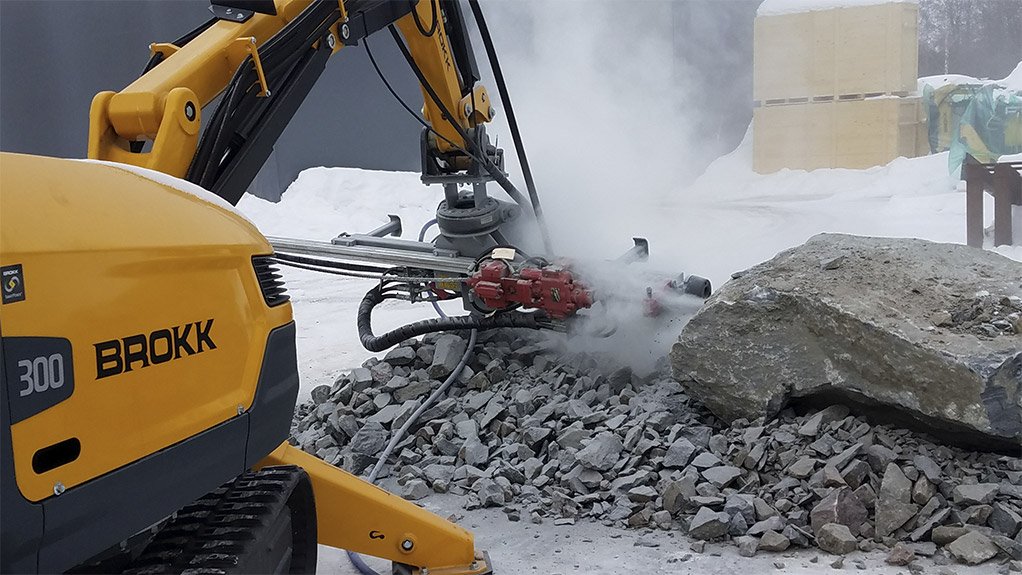 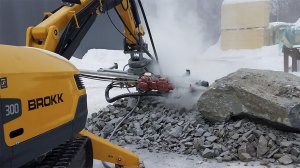 EXPLOSIVE COMBINATION The MMB326 pairs with the Brokk 300 and allows for drilling multiple hole sizes of up to 3 inches in concrete, rock and compact soil

“Whether it’s drilling and blasting operations in a confined space, rock reinforcement or preparing hard rock for splitting, the package of a hard-working hydraulic rock drill with a zero-emission robot is a game-changer.”

The attachment can be used to access areas in which traditional drilling machines would be too big to be used, adds Brokk global sales director Joakim Furtenback.

Brokk, with TEI, can reduce much manual drilling in mines globally, asserts Furtenback.

“With the combination of the drill attachment and a Brokk machine, drilling can often be completed within the time that it would take to mobilise a conventional drill rig to the actual job site,” he maintains.

Brokk received an order for an underground zinc mine in India, where a Brokk demolition robot will be used with a TEI drill and demolition device manufacturer Darda’s C20 rock splitter in June.

“The machine will be used to break, drill and split big boulders – which are too big to be handled by the underground loaders – after the main blast. It is an ideal application, as it is dangerous for people to enter the area. The remote-control reach and combination of breaker, drill and splitter are key for this project,” explains Furtenback.

Ippersiel emphasises the importance of the remote-control function, as the controls of the robot and drill are integrated into the remote-control box. He also stresses the importance of the cooperation between Brokk and TEI, which has allowed for the enhanced integration of the controls of the robot and the drill.

“Brokk has been working closely with TEI for a number of years, and this has led to the development of new drills, such as the MMB326, that match up to the capabilities of the Brokk machines,” states Ippersiel.

The MMB326 drill attachment allows for drilling multiple hole sizes of up to 3 inches in concrete, rock and compact soil. It is manufactured of a lightweight, compact TE326 drill head featuring patented technology to improve longevity and productivity.

This makes it a more accurate and faster alternative to jackleg drilling through brick, concrete and rock. The combination also eliminates fatigue caused by operating the heavy manual tools and promotes safety by enabling operators to stand further away from the drilling site.

TEI international sales VP Glenn Patterson says the attachment has a hammer power of 11 kW and torque of 300 Nm.

“The incorporated flushing swivel makes for a compact design and eliminates the need for added tool joints to provide a greater transfer of power to the bit face. It can also handle air, water and grout for flushing media,” he comments.

The TE326 drill head is a versatile hydraulic drifter that incorporates TEI’s patented automated stroke adjustment (ASA) technology. The high-frequency and smooth operation allowed for by the ASA technology prolongs the drifter and tool life while increasing productivity, and reducing downtime and part costs.

Features such as variable rotation speeds of up to 250 rpm, help to minimise the risk of jamming, while the reversible rotation motor delivers high torque to ensure powerful drilling.

The MMB326, available in 1.8 m or 2.4 m mast lengths, offers an expanded hole range of up to 76 mm in diameter. It uses a 360º positioner for drilling in different positions. The attachment can be used with a manual centraliser for rock drilling or with a hydraulic clamp for extension drilling and roof bolting.

The attachment is a ready-to-use option which can be configured to a Brokk machine without the need for modification. It can be integrated with the Brokk controls, which allows for not only simultaneous control of the Brokk machine and the MMB326 but also greater efficiency, as it frees up an extra worker who would normally operate the second set of controls.

The attachment makes less noise than pneumatic handheld alternatives, which allows for use of equipment in locations governed by noise-control restrictions.

“Any mine can use this multi-tool technology because of our long presence and proven record in the tunnelling industry, which shares many of the same issues,” concludes Ippersiel.