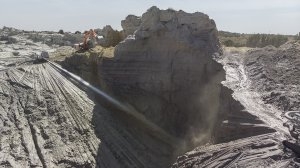 “We’ve never seen numbers like this. I mean the cash operating profit was R1.4-billion and earnings R950-million. These are numbers over a six-month period. It’s really been a period where a lot of things went right for us,” DRDGold CEO Niël Pretorius told Mining Weekly in a Zoom interview on Tuesday after the Johannesburg- and New York-listed company reported 129%-higher headline earnings a share. (Also watch attached Creamer Media video.)

The business has been fine tuning technology, focusing on mechanisation and implementing systems over many years and these delivered very good volumes at the right time.

“The plant’s been set up really well, the volume throughput was there and as a consequence we were in a position to take full advantage of this much higher gold price and as a result you see that in the financial numbers,” said Pretorius.

The interim dividend of 40c a share is 60% up on 2019 and revenue came within a hair’s breadth of the R3-billion mark – and there could be a lot more to come.

Pretorius views the outlook for gold as being really good. Pre-Covid, a significant volume of debt went into the markets to stimulate spending and to support consumerism. Now, following Covid, these debt holes have not been fully plugged “and I think a lot of additional gaps will now start opening up. The impact and devastation of Covid on economies globally has still to be fully seen and debt levels are going to go up even further and there just seems to be no putting on of the brakes when it comes to the rate at which money is being printed and pushed into international economies. At some point or another it’s got to stop.

“Perception is probably going to push the gold price down a bit but buying gold is like paying insurance. Nobody likes to do that but ultimately you don’t really have much of a choice and if there’s not enough of it going around, it could be very, very good for the gold price,” said Pretorius.

In the meantime, DRDGold is focusing on optimising its resource by ensuring that it has sufficient plant space and the right infrastructure in place to give its maximum access to its resource, which totals more than 200-million tons.

“A lot of time and effort’s going into planning additional deposition space. If gold is rebased north of $1 800/oz, we might be a little bit more ambitious in terms of just the size of our second phase project at the Far West Gold Recoveries (FWGR) gold operations,” Pretorius said.

Much work on a definitive feasibility study and planning for the FWGR Phase 2 project continued apace in the six months, with the amended design for the regional tailings storage facility submitted to the Department of Water and Sanitation in November.

DRDGold may be in a position to build infrastructure, plant and deposition infrastructure capable of bringing about a regional consolidation on the Far West Rand by providing enough space for everybody’s tailings in that area. From an environmental perspective, that is really what should be achieved as a considerable volume of tailings have been poorly sited over dolomitic features. These pose a risk to underground aquifers and need to be moved and DRDGold believes it could play a role in that regard if the gold price remains above its current levels.

“We’re looking at ways and means of further increasing our resilience so that when the cycle does turn, we can see it through, without having to cut back. We can retain crucial skills and sustain infrastructure. But at the same time, also positioning ourselves in such a way that if it does take off further, that we can once again take full advantage of a much higher gold price,” said Pretorius.