Diamond market back in sync in 18 to 24 months – Bristow 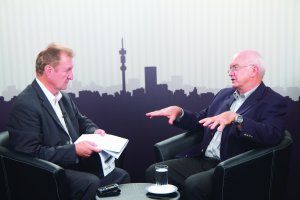 Consultant geologist Dr John Bristow estimates to Mining Weekly Online’s Martin Creamer that the diamond market is 18 to 24 months away from betting back into sync. Video: Nicholas Boyd.

A combination of clean-out and restructuring of the midmarket occupied by cutters and polishers, and the commendable supply constraint exercised by major producers, will combine to put the global diamond market back in sync in the next 18 to 24 months, diamond consultant Dr John Bristow forecasts.

The developer of two successful alluvial diamond companies – Gem Diamonds in 1998 and Rockwell Diamonds in 2006 – commended De Beers and Debswana for opting to leave diamonds in the ground and Russia’s Alrosa for building inventories to prevent an oversupply of rough diamonds.

But he added in a video interview with Creamer Media’s Mining Weekly that the rough/polished price disconnect needed to be worked out of the system before normality could return.

The midmarket, with access to very cheap credit, had been buying more rough diamonds than it should have.

“That’s left a hangover that’s now got to be cleaned out,” he said, noting the growing cognisance of the importance of removing excessive debt from balance sheets.

He regards the best way of addressing competition from synthetics as creating the same upside potential that was achieved when 40-million carats of cheap Argyle diamonds was brought into the market in the 1990s.

“We should embrace synthetics and find a niche for them as we did with the Argyle diamonds,” the co-developer of the unique micromineral (perovskite) age-dating technique stated.

He noted that the industry had also been able to cope with the competition presented by the flow of cleaned-up, lower-priced brown diamonds onto the market since the late 1990s.

The global financial crisis of 2008/9 had also led to a recycling of diamonds, which McKinsey calculated was likely to represent 30% of supply by 2025.

In a presentation at this month’s Prospectors & Developers Association of Canada (PDAC) conference, entitled ‘The future of the international diamond business: change and consolidation’, Bristow outlined how mine closures and the absence of new mines were reducing supply growth.

In the presentation, he also forecast consolidation of the midstream cutting and polishing sector, where there would be more bankruptcies, factory closures and job losses and called for concerted and innovative marketing in the mid- to long term.

He found those attending the PDAC to be mindful of the industry’s current problems but also intent on addressing them as they moved forward.

From the PDAC, he spent time in the heart of New York’s famed 5th Avenue and 47th Street diamond district, where he found the business to be “very quiet”, particularly in white stones.

He noted a prevalence of coloured gemstones, which he identified as another apparent shift of which the industry should take note.

While the going was currently tough, a long-term view was being maintained in neighbouring Botswana, where “wonderful” diamond infrastructure had been built on the edge of Gaborone to coincide with the Diamond Trading Centre moving “lock, stock and barrel” from London to Botswana.

“They’re going to tough it out” and be ready to take advantage of any upturn.

Since 2000, producers and market specialists had predicted that demand for diamonds would outstrip supply, but history had shown this argument to be flawed, said Bristow.

It was cheap bank credit for those along the supply chain that drove up the price of rough diamonds at a time when strong expected demand growth in Chinese jewellery failed to materialise.