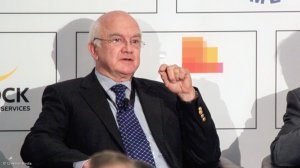 Bristow, who has an illustrious record as a diamond explorer and miner, flashed a graphic on to a large screen that pointed to the worrying decline of South Africa’s junior diamond mining sector. (Also watch attached Creamer Media video).

“We’ve got the best diamonds in the world,” said Bristow, who is director of a company that runs a diamond tender house that sells diamonds on a monthly basis.

Two months ago, the 106 ct of diamonds sold fetched R44-million.

He described as tragic the resulting financial plight of near-mine rural communities, whose employment prospects are being diminished by junior mining's decline.

“The communities have nothing. The farmers have all mechanised, so there’s huge unemployment, and we’re killing the small mining sector,” Bristow warned.

“I’m very concerned about our junior sector. We need it. We’ve got entrepreneurs, black entrepreneurs and new entrants. This sector should be where we are focusing. We actually have amazing deposits,” he said.

“We need to go back into the junior space and fix it because we can actually turn this sector around quite quickly.”

Bachmann said there was huge risk aversion to investing in South Africa, owing to government policies putting investors at a huge disadvantage. Using a soccer analogy, he said the disadvantage was so great that it was like a visiting soccer team having to play with seven players instead of the usual 11 and the goalkeeper having his hands tied behind his back.

“You shouldn’t be surprised that no one wants to invest here. Policies need dramatic change, and that change is possible,” said Bachmann, who credited Peru with blazing a trail of mining policy reform that South Africa could emulate.