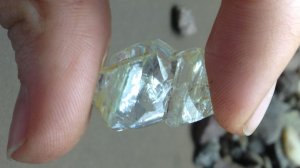 The Kelowna, British Columbia-based miner on Wednesday outlined several production enhancements during the third quarter ended December, designed to assist the company to arrive at a commercial production decision in the near term.

A critical development was that the TSX-V-listed company received final approval for, and completed the installation of, four more water boreholes and the required pipelines for each, which brought the total number of operational boreholes/pipelines established at the project to seven. Diamcor expects these to support the short- and long-term needs of the project.

Now, the company can liberate diamonds from the calcretised material typical of the higher-grade lower basal portion of the deposit, and allow for the simultaneous treatment of all screened material from 1 mm to 45 mm, which can then be transported to the main treatment plant for processing moving forward.

Further, Diamcor has completed the installation of a significantly larger dense media separation (DMS) plant at the project’s main treatment facilities. This will double initial processing volumes, with the potential for further increases over the long term, the company said.

It has also completed upgrading various screening components, material handling systems and water recovery systems, along with establishing a dedicated larger material circuit for treating material up to 45 mm in size. Together, all the elements are designed to enhance automation and operational efficiencies for the long term.

Diamcor has also installed a significantly larger final recovery and sorting facility at the project as part of its expansion efforts. The expanded final recovery facilities include the addition of four new X-ray diamond recovery units to supplement the project’s existing X-ray units, an expanded secondary recovery system, a dedicated large diamond recovery circuit and the expansion and further automation of the project’s sorting facilities. These new facilities willalso not only support Diamcor’s short-term targeted increases in processing volumes, but also potential longer-term expansions.

Diamcor has established a long-term strategic alliance and first right of refusal with Tiffany & Co Canada, a subsidiary of New York-based Tiffany & Co, to buy all the future rough diamond output from the Krone-Endora at Venetia project, at then current prices to be determined by the parties on an ongoing basis.

Diamcor has not yet declared commercial production at Krone-Endora at Venetia and recoveries were incidental to the ongoing commissioning and testing exercises performed at the project, which is located directly next to diamond major De Beers’ Venetia mine – the country’s largest diamond mine.